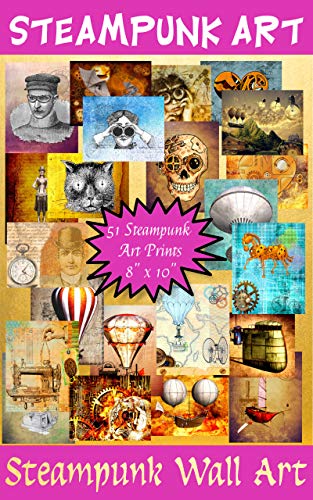 Our steampunk art print book is temporarily free on Amazon.  Today, February 24 though February 27, you can download it at no cost. The title is 51 Steampunk Wall Art Images In High Resolution and here is the content of the summary for this fun book.

In our busy studio, we spend time just creating for the fun of it. And a huge favorite around here is steampunk art. And what is steampunk, you might ask? Did you ever see the wonderful (and sadly short lived) TV series, “Firefly”? It was billed as a “space Western drama” because in the same show you might see a very high tech space craft landing on a planet whose inhabitants were riding horses. Sort of “the wild west” meets science fiction.

Steampunk is like that – a combination of Victorian England (or sometimes the American wild west) and fantastical steam technology. Steampunk features inventions like people in the 19th century might have imagined them to be. Authors like the famous H. G. Wells (The Time Machine, The Invisible Man, The War of the Worlds) and Jules Verne (20,000 Leagues Under The Sea, Around the World in Eighty Days, Journey to the Center of the Earth, From the Earth to the Moon) used such inventions in their futuristic novels.

Steampunk is more than inventions, though – it is particularly famous for its fashion and includes creatures and people we might term “bionic” today, a combination of flesh and blood with technology. Some of the steampunk creatures – like our cat with clock eyes or a tiger with a glowing red implant – remind us of The Borg, the terrifying adversaries of humanity in the Star Trek series. The Borg are truly terrifying creatures because they become robotic and mindless once they are “redone” as cyborgs. In one poignant episode a crew member is being pulled away by a Borg and he begs captain Jean Luc Picard to kill him before he loses his humanity. We can certainly understand and appreciate his sentiments.

Still, we love steampunk and since we have two full time graphic designers on staff, a semi-contest began with each one creating fantastical steampunk art that became ever more “out there”. We called a halt with these 51 steampunk images but they became so popular that we expanded our series into bookmarks, gift tags, steampunk backgrounds and even steampunk stamps. So if you love steampunk you are certain to find some fantastical creations to love in this vibrant series.