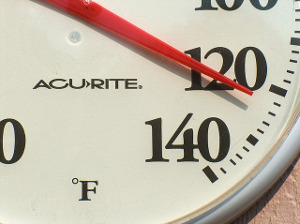 It has been so horribly hot here in Atlanta that our fans and air conditioning units have been running full speed around the clock. One of my favorite ‘cool sources’ is the ceiling fan over my bed. We recently replaced the ceiling fans in all four of our bedrooms and we chose Craftmade ceiling fans.

Colorful packaging, claims of “new and improved” products, and other standard tricks in the advertisers’ arsenal, when not backed up by product performance, have made cynics of consumers.

Even the once strongly-held belief that a product’s quality was commensurate with its price has been to a large extent abandoned.

Today’s wiser consumers want, and are determined to get, the maximum value for every penny they spend.

And consumers in the market for ceiling fans are no different.  Even though the 1970’s introduction of air conditioning, as the home cooling method of choice, aimed a body blow at the ceiling fan industry, there were a few ceiling fan manufacturers who survived.  And their ability to do so is a sign that they have continued, to provide their customers with products of superior quality to this day.

Among these companies is Craftmade.  Craftmade ceiling fans, introduced in 1985, come in styles ranging from Victorian to contemporary minimalist. Their two dozen fan designs can be altered, with the addition of one of some eighty different light fixtures and one hundred interchangeable glass accents, to accommodate any décor.

Craftmade also has a wide selection of blade finishes and motor colors so that you will find the perfect combination for your home.  And, if you still can’t find what you want in their pre-made Craftmade ceiling fans, Craftmade offers you the option of ordering ceiling fan made to their specifications, assuring that you’ll get exactly what you want.

Craftmade Ceiling Fans is so well-respected, in fact, that from 1992 to 1994 the company was on Forbes Magazine’s list of “The Top 200 Small Companies in America”.  Even the most discerning consumer has to be happy to know that!