You are here: Home / At Home / How To Be A Terrible, Awful, Horrible Salesman! 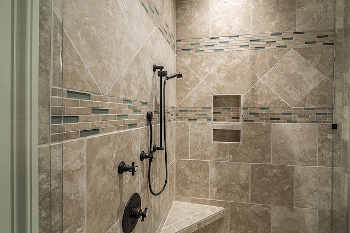 The title of this article, “How To Be A Terrible, Awful, Horrible Salesman!”, sounds a tad extreme. But it really isn’t. We have to wonder how some people make a living in sales because we met a terrible salesman two days ago.

My shower needs to be redone because, unbeknownst to us, the tile was leaking and allowed water into the sub-flooring, resulting in an awful mess. So we’ve interviewed four different companies so far, with four more scheduled. The really awful salesman was named Randy. He looks like he is somewhere in his 60s and he trolled into our home with a very commanding presence: booming voice, eye contact, shaking hands vigorously. After looking at the shower, we sat at the kitchen table and he began his ‘performance’.

First, he went over the five point company mission statement. [Note to salespeople: don’t do that! Borrrrrrrrrrrrrrrrrrrring!]

Next, he turns his iPad toward us and we endure a rambling video of the company CEO, wandering through expensive offices, telling us the history of the company, what they do for their employees and assuring us that they will treat our home just as though it’s their home. (Sure they will). Then the CEO keeps talking but the screen goes dark while the CEO goes over their mission statement – again. As he discusses each point, Randy touches the screen and 1/5 of it lights up as their Fearless Leader discusses each of the five points. Again.

As Randy opened his mouth to start on Phase 3, I stood up and said, “I don’t want to be rude but I don’t care about this and don’t want to see any more. If you want to show us what you will do for my shower, we’re interested.” When I said this, Randy literally turned red and told me I was rude. Amazing way to treat a customer. I told him that he could talk about the product or we had nothing more to discuss. I was polite throughout the entire exchange but he told use in an aggrieved voice that he was “supposed to” get 90 minutes of our time. I guess we’re supposed to feel guilty.

The rest of the presentation was comical. As a friend said, “What is this? Junior high school?” Apparently so. Randy made constant comments like:

Randy talked constantly about their integrity and at one point I asked him to stop. I told him that this was the FIFTH time my shower has to be redone – and guess what? The first four companies assured us of their “integrity” and also assured us that this was the last time we would ever have to deal with this shower problem. Yet, here we are again. He was clearly ready to strangle me and replied that his company hadn’t told us about integrity. I told him that maybe they had integrity and maybe they didn’t – but just saying so meant nothing to us.

There was lots more, but you get the idea. The point of this explanation is that the entire meeting was about HIM. Not us, the customers. I was not trying to give Randy a hard time and I was always polite. But a good salesman would have adapted to my wishes, rather than getting angry.

He gave us a price of almost $12,000, which he expects us to spend without caring what we want. He left angry – just because we didn’t want to endure his boring presentation. We were entertained by his juvenile behavior, rather than angered. But at the same time, there is No Way we will do business with this guy – or his company. This is Salesmanship 101 – focus on the customer. But Randy didn’t do that and I expect that he’s used to dominating all sales calls and didn’t like having customers suit themselves. Regardless, it was a missed opportunity for him to make a nice commission. I have no idea how much money he would make if we had signed up with him but it’s probably at least $1000, although that’s speculation on my part. Regardless, salesmen and saleswomen learn from Randy and don’t treat potential customers this way. The other three people we’ve talked with have adapted to our wishes, rather than theirs. And that’s the way it should be.