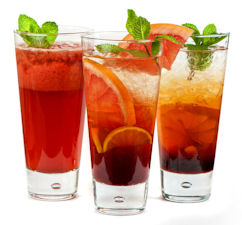 I see the word “hacks” everywhere these days. In fact, I think it’s so omnipresent that it’s become rather meaningless. But in the spirit of popular culture, I give you this small collection of kitchen hacks. Actually, they’re decent ideas, most of which never occurred to me.

1. Keeping Your Iced Tea (Or Any Cold Drink) Cold

My son is an iced tea addict and I’m a Dr. Pepper addict. I don’t use ice at all and he drinks his tea fairly fast and the reasoning is the same for both of us: as the ice melts, it waters down the drink and makes it less potent.

So, here’s a clever trick: throw in some frozen fruit! It will keep your drink cold, won’t melt as fast as water since it’s much thicker, and will add a nice flavor to any drink, rather than just making it watery.

We southerners love our sweet corn – but no sugar in our cornbread, thank you very much. To make corn sweeter, add a Tablespoon full of sugar to the boiling water you use for cooking your corn. That sweet spoonful won’t add calories but it will bring out the sweetness of wonderful, wonderful corn.

Dairy products like sour cream, cottage cheese and yogurt can go really nasty in a hurry, especially once they’ve been opened. One way to extend their life is by storing them upside down. If you don’t believe me, just try it out for yourself – store one carton of yogurt ‘right side up’ and the other upside down and see which is fresher after a week or two. Just don’t ask me why this works – I’m guessing it’s because storing that way keeps out oxygen, but I don’t know that for sure. I could be 100% wrong.

OK, fresh berries aren’t actually made out of gold but they cost as much as gold nuggets. $4.99 for 1/2 cup of raspberries? Are you kidding me? The only thing worse than paying the price is buying them … and then discovering a moldy, mushy mess a couple of days later.

An easy fix is to make a liquid of 1 part apple cider vinegar and 10 parts water and soaking the berries for a couple of minutes. Then allow them to THOROUGHLY dry and store in the fridge. This will extend their life. Or so I’m told. I wouldn’t know because when I get fresh berries they’re gone so fast that they never have a chance to deteriorate. But I know it’s true that molds don’t like vinegar so this hack has a good chance to prolonging the life of a berry.

5. When Your Brown Sugar Becomes A Club For Fighting Muggers

All cooks know that brown sugar can develop the consistency of concrete and there are a couple of ways to soften it up.

* I know from personal experience that adding some apple to the bag will soften it up and a friend adds a piece of bread to hers.

* But of course, those remedies take time so a quick way, I’m told, is to put your sugar in an open bag in the microwave, next to a cup of water. Turn on the machine for about two minutes. I won’t test this because I don’t use a microwave, although I have one because my son and daughter want one.

6. Don’t Throw That Wilted Lettuce Out! 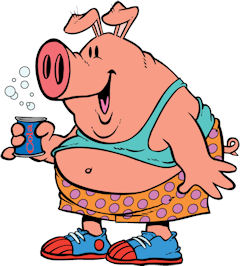 If your lettuce looks as unappetizing as lawn clippings, don’t despair because it can be revived. Simply submerge it for 10 minutes or so in a bowl of cold water that has a couple of spoons of apple cider vinegar in it. You can tell when it’s ready to be eaten.

Of course, if it’s brown then throwing it onto your compost heap is about your only option. Unless you keep pigs, of course, because they’ll eat anything. In fact, I read a detective novel where the murderer … well, never mind about that.

Cooking pasta can be a challenge. We don’t want crunchy mac and cheese but pasta with the consistency of library paste isn’t tasty, either. So if you’ve cooked it too long you can usually revive your pasta by lightly sauteing it in olive oil. And let’s not forget that olive oil makes anything delicious.

Use these seven hacks if they’re useful to you and stay tuned for more, more, more! :-)