You are here: Home / At Home / Recipes-Food / Nutrition For Kids: 10 Ways To Promote Fruit

Every parent knows that nutrition for kids is an important subject – most obviously since they're growing and need healthy fuel to grow properly. And fruit is loaded with vitamins, minerals and fiber. But how to get them to eat fruit beyond apples and bananas? REAL fruit, that is – not "fruit-flavored" garbage cereals that are loaded with sugar and nothing even resembling something that grows in the ground. Glad you asked! Here are 10 great ideas. 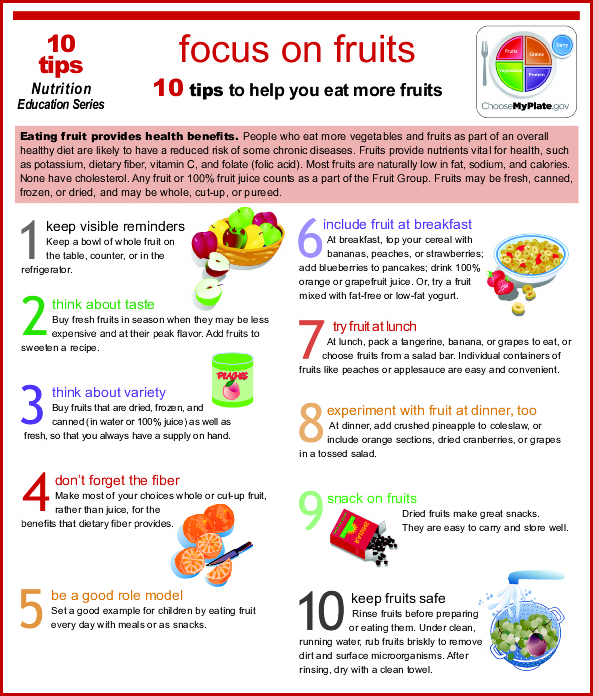 1. Keep fruit in plain sight. Even kids (and adults) who are willing to eat fruit likely won't remember grapes, instead of cookies, if they're hidden away in a drawer.

2. An apple tastes a lot better in October, when it's fresh, than it does in June when it's been sitting around in a warehouse for months. Not to mention that produce is cheaper when its seasonal.

3. My family loves a fruit salad with a lot of variety in it so don't be boring. Even trying a new fruit every once in a while is an idea worth considering. :-) But … we don't agree with the idea above about canned fruit. To make it last for years, all the Life Force has been removed from it. The best choices are:

4. Once upon a time I was a fanatical juicer but I've revised that idea because the fiber is just too important. Whole fruit is better – although I know there are many in the natural health field who would argue with me on that.

6. Most people like a banana or a few berries on top of their (whole grain) cereal in the morning. It's easy to get fruit into a breakfast menu. Or top a waffle or pancake with a fruit sauce. Some pineapple tastes fresh in the morning.

7. An apple with a sandwich is a meal that most kids love. Or pizza and grapes. Or a wrap and some fresh berries.

8. Fruit at dinner isn't as hard as it sounds. For instance, try this strawberry sorbet recipe – every kid (even those in their 80s) that I've given this to, likes it.

9. Dried fruits have concentrated calories but they're still a convenient snack that most kids will eat. A few raisins or other dried fruit mixed with nuts is a great snack idea.

10. And real fruit does grow outside so make certain that it's always clean. But you already knew that, right?

Nutrition for kids really isn't a complicated subject. Humans have been eating fresh foods, in season, for at least a million years. The junk that passes for food in the 21st century is the odd way to eat, genetically speaking.