We recently tried Angelic Sprouted 7 Grain bread and it’s a definite winner! It’s great for the gluten-free crowd, as well as folks like me who are unbothered by gluten but very interested in natural health. Let me tell you why we like it so much. 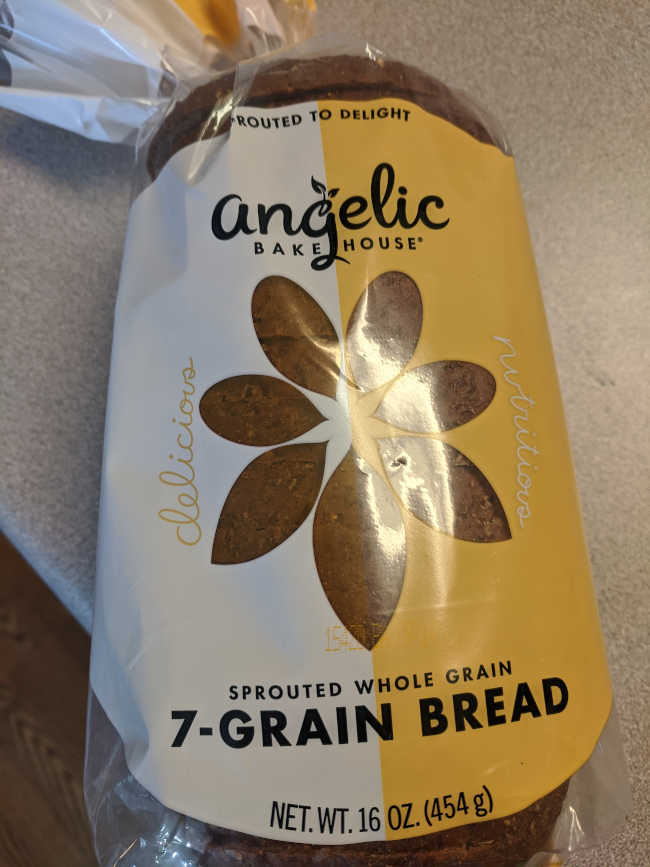 First of all, there’s the price. I’ve been buying Ezekiel sprouted bread at Publix and it’s more than $6 for a single loaf. I bought this bread bread at Costco and it’s about $5 – for THREE loaves.

Secondly, there’s the freshness. Publix only has sprouted bread that is frozen, and it obviously isn’t very popular because it often has ice crystals inside the package, meaning the turnover is low, low, low. The Angelic bread is very fresh, which is a very welcome change. The Publix-Ezekiel has to be toasted because no one can possibly eat a piece of Ezekiel after it’s been frozen and thawed. It’s just too hard and dried out.

I want to point out that this isn’t the fault of Ezekiel, whose products I like very much. However, if we don’t have access to fresh Ezekiel, but can get fresh Angelic, we have to go with that.

Angelic bread is very healthy. According to their website, here are the ingredients:

And, of course, there’s the convenience. Have you seen the recipes for making your own sprouted bread? That’s after you grow the sprouts, dry them out, etc. No thanks. I don’t do that kind of cooking anymore.

And lastly, and most important, is taste. If we don’t enjoy eating it, it doesn’t matter how great it is for our health because we won’t be consuming it. I love the taste of this bread! Taking a nice, fluffy, soft slice out of the loaf is a real treat. And my son loves it – and he won’t eat Ezekiel bread. He says this tastes like “real” bread.

So, for the five reasons listed above, we are huge fans of Angelic Sprouted 7 Grain bread and will continue to buy it.