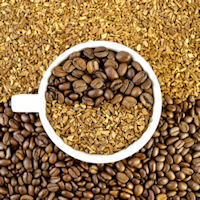 Americans are coffee-crazy and I am the only person I know who doesn’t really like coffee. Actually, that’s not totally true since I love some of Starbuck’s concoctions. Specifically the pumpkin spice latte that’s about to be back in the coffee shop. Erin, our guest author today, reviewed sic different varieties of Taster’s Choice and gives her recommendations. So, for you coffee lovers …

I received a one-cup sample of each of the six varieties of Taster’s Choice instant coffee as a promotion from Nescafe. I’ve now tasted each one, and here’s what I thought:

The best of the bunch was hazelnut. It had a very nice, nutty aroma, and that aroma translated into strong flavor. The vanilla flavored instant coffee was also very flavorful and pleasantly sweet. Lovers of flavored coffees will find these an economical, and lower calorie, alternative to ordering coffee with a shot of a flavored syrup from a coffee house, without losing any of the taste. It really was surprising how strongly they tasted like hazelnut and vanilla, respectively. In other words, they lived up to their names.

Of the unflavored coffees, the most pleasant surprise was the 100% Colombian Gourmet (purple label). It had an amazing scent and a nice, bold flavor.

The second best of the non-flavored varieties was the French Roast (dark brown label), which also had a nice aroma. The flavor left a little to be desired, though.

The least pleasant selections were the House Blend (red label) and the decaf. The decaf actually tasted salty. The House Blend wasn’t salty, but it was only slightly better than the decaf. For unflavored coffee drinkers, I’d definitely recommend the 100% Colombian Gourmet.

About the reviewer: On her blog, Pagan Spirits, Erin O’Riordan typically writes about books. She’s an author, editor and book reviewer. Occasionally, she’ll digress into a beverage post. Here’s one about tea: http://erinoriordan.blogspot.com/2010/09/to-tea-or-not-to-tea.html