You are here: Home / At Home / The 2 Kinds of Garden Faucets 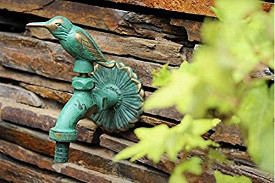 The first category of garden faucets is usually ugly but always sturdy and durable. The second is very ornamental, with birds, butterflies or flowers as their decorative themes. The first kind of garden faucet is installed in places where they need to operate continuously (water hoses etc.) and where no one beside the homeowners will see them.

The second is used mainly as a piece of decoration or in an attempt to attract birds to the garden.

The most common piece of decoration in case of garden faucets is a figurine of some bird sitting on a faucet, like the adorable humming bird faucet above. Those birds are often painted into their natural colors and it is believed that they attract real birds into the garden. It’s hard to say if that’s true, but if that’s not a myth, such garden faucets will prove to be invaluable garden decorations – there are few things more beautiful than a garden full of small birds.

But even if the faucets have no such effect, some of then can surely improve the look of your garden and make it livelier. There is simply no way to determine from a distance if a small bird sitting on a faucet is alive or not unless it is covered by a layer of snow.