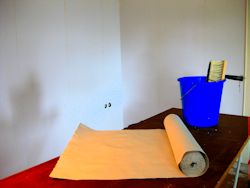 Wallpaper has come a long way in the past fifteen years. The mental image you get of your grandmother’s brown striped wallpaper that is peeling in her kitchen is no longer applicable. The new paper that is being produced is not only more colorful but easier to hang on your wall and easy to take down when you want to put a new pattern up.

The wallpaper industry has rebounded from an otherwise dead fifteen years. The 1990s and early 2000s was a time when homeowners avoided wallpaper completely.

The main reason for this was that new home builders were not offering it any longer. It was all about cutting costs and headaches. When a couple bought a home they were generally given books of wallpaper prints to choose from during or after closing.

The husband and wife would choose which wallpaper they wanted and the homebuilder would pay a subcontractor or paperhanger to install it. It used to be included in almost every new home that was sold.

Several home builders found out that it was much more cost effective for them to just use paint. They tried it and nobody baulked so they kept doing it.

The trend took off and every builder followed suite. Before you knew it you had millions of homes going up without wallpaper and the public as a whole just forgot about it.

So, what exactly changed over the past several years?

The answer is television. Cable stations like HGTV, the DIY Network and The Learning Channel all have popular interior design shows that have developed a large following during the past decade. They are all hosted by the county’s top interior designers, like Candice Olson (my absolute favorite!!!), and people begin to notice that many of these professionals were using very vibrant wallpaper prints to redo homes.

It’s funny how things ebb and flow throughout the stream of time and wallpaper, once the ugly stepchild to paint, became popular again.

The latest bust in home prices has helped the wall coverings industry as well. From 2001 to 2008 the average time families were staying in their homes was approximately six years. In 2011, due to the collapse of the real estate market, that number has increased to nine years and the time is still rising.

Many people have resigned themselves to the fact that they are going to have to stay in their current home longer than they originally anticipated.

The thinking is that if they cannot sell their house for what they want, they might as well make it as aesthetically pleasing as possible.

So, while new home sales are down compared to 2007 levels the remodeling industry is doing better than ever. In fact, many new builders who managed to stay in business post 2008 have focused their efforts as grabbing as much of the remodeling market share as they possibly can.

And, what are their clients asking for: wallpaper. Manufacturers like Chesapeake and Wallquest are leading the way in creating contemporary prints that the market is demanding. Others are following suite. People want a bright colorful print that will make an otherwise boring room come alive and that is what the top interior designers are delivering.

Now is the best time to start looking for wallpaper if you are thinking about redoing your whole house or just a specific room. The options to choose from are endless and if you are a smart shopper you can get some excellent paper at a decent price.