You are here: Home / Beauty / The Path of Least Resistance and Aging with Grace 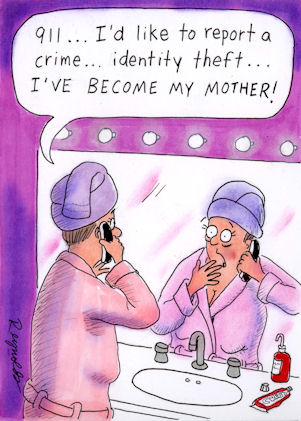 “The richest man is not he who has the most, but he who needs the least.” ~ Author Unknown

There is something has been bugging me for awhile now; how is it that in North America we are getting fatter and spending billions of dollars every year on getting rid of all of that fat we are accumulating, when there are still countries in the world where people are dying of starvation? We have an epidemic of “housewives” who can’t move their faces, yet in other parts of the world there are girls being sold into the sex industry in order to feed the rest of the family.

I can’t pinpoint an exact moment it hit me, but it was probably more of a gradual realization as I neared the pivotal age of 40, and then finally crossed into the abyss this past March. There becomes a turning point somewhere along the road of aging where you begin critiquing every grey hair, new wrinkle, and skin slowly giving in to gravity, of yourself and every woman 5 years younger and 15 years older. Then comes an almost frantic realization that IT is starting… you look at the older women and know this is what is in store for you and start taking note of those who are aging gracefully, those who are not, and the more common nowadays, those who are putting up way too much of a fight. Now is the time to make a choice, so they say… if you are going to start fighting, isn’t it better to do so before the wrinkles are too deep and your skin is dragging on the floor?

So, it was somewhere in between spending over $100 on some magic potion promising never-ending youth and watching a TV special on starving kids in Africa that I realized something was terribly wrong with this picture. Do we have too much money? Are our priorities all backwards? While we are checking the mirror every two minutes and worrying about every new pucker of fat caused by over eating, there is a child somewhere in this world who is taking his or her last breath with a bloated, starved stomach.

I vowed that I would be one of the few to age gracefully, but it is not an easy task. It’s like being a heroin addict and knowing there is a fix just in the next room. What would it hurt to go and have a just little? But is “just a little” ever enough? Just a tiny bit of botox to erase those sleep wrinkles under my eyes wouldn’t hurt anyone. But I know that a little will lead to more because, just like with heroin, you have to keep doing more and more to get the same affect that you got with the one before.

So, when I look in the mirror and contemplate a nip here and tuck there , I try to remember those in the world who are going without and am so grateful for what I do have, not what I don’t.