You are here: Home / Beauty / Women Celebrities Who Practice Yoga: How It Has Changed their Lives 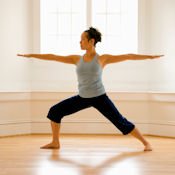 Yoga has become a popular way of improving health, reducing stress, concentrating the mind, and in dealing with the events of everyday life. There are many celebrities who practice yoga and popularize it, which is great because, especially in the west, many of our common health issues could be prevented or alleviated by the daily practice of yoga. In this article we will look at several different female celebrities who practice yoga, and their reasons for doing so.

Marilyn Monroe was an avid supporter of yoga, and used it to stay trim and fit. In 1948 Time Magazine even did a full photo shoot with Marilyn in many different yoga poses. This is very interesting because at the time, very few people in the West would have known what yoga was, so for a celebrity to endorse it at that time so openly was a very brave act. We can almost call Marilyn Monroe the first celebrity pioneer of yoga.

The outrageously popular singer Lady Gaga has tweeted many times about her practice of yoga, and the lessons that she receives from her teacher. She says that daily affirmations, of telling yourself that you are a good person and that you can do what you want to do, are great tools for success. She says that she practices this every day as a part of her yoga routine.

One of the more famous celebrity yoga fans is Jennifer Aniston, star of the hit show “Friends” as well as countless movies. She says that she keeps flexible and in shape due to her practice of Bikram yoga, or “hot yoga”which is very physically demanding and involves a lot of sweating, which is a fantastic way to release toxins in the blood.

International pop legend Madonna has been one of the biggest advocates of the practice of yoga. She has said to have practiced Ashtanga yoga, which involves a series of active and athletic moves and stretches which are synchronized to the breath. It is said to detoxify the body and cleanse the organs. Madonna started doing yoga after the birth of her daughter in 1996. She has said that it is a workout for the mind, the body, and the soul.

Another vocal practitioner of yoga is actress Meg Ryan, starring in such movies as “Sleepless in Seattle”and “”You’ve Got Mail.” Ryan has been practicing yoga for many years and has said that it makes her more calm, and puts her in the place of the witness.

Actress Thandie Newton swears by her Jivamukti yoga routine, calling it food for her soul. Jivamukti Yoga is a comprehensive practice which addresses all aspects of us and is moral as well as physical. It can be very demanding. It has five central tenets; scripture, devotion, non-harming, music, and meditation. Jivamukti yoga is also the school that the musician sting has said to practice.

Christy Turlington, world famous model, has been practicing yoga since she was eighteen. She studies Ayurveda and Vastu. Turlington says that the affect her yoga practice has had is that of being in the moment, where at first she became involved because of the cleansing, bodily affects of the practice.

It is great that these celebrities are shedding more light on the importance and power of yoga and meditation. Hopefully in the future more will be more open about their use of this ancient healing technology, throwing light on a subject that is so needed for us at this point in time.

Jennifer Koebele is a writer with an interest in personal development and a passion for making a difference in people's lives.  She is particularly interested in yoga, meditation, and chakra healing.  You can read more of Jennifer's work at Omharmonics.com.