You are here: Home / Health / Amoxicillin Has Made Me Very Sick!!! 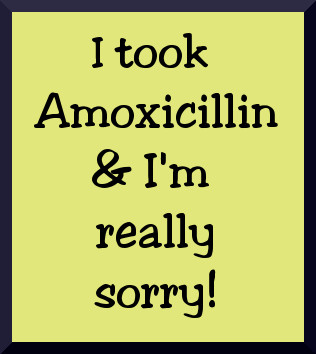 This week I made a singular lapse in judgment! I had some oral surgery and the dentist prescribed two prescriptions: a suped-up Ibuprofen for pain and Amoxicillin, 500 mg, as an antibiotic. Without really considering it, I followed the directions and, as a result, have been feeling DREADFUL.
The surgery was on Thursday and by Sunday I felt awful. Saturday night I woke up frequently, approximately 8-10 times, which never happens to me. As a result, I was really exhausted. In addition, my stomach hurt. A lot. And it had hurt on Saturday but it wasn’t as severe. In addition, I had no energy and generally felt blah. I commented to my son that I was puzzled as to why I felt worse the further away I got from the surgery. Surely I should feel better, not worse??? He commented that perhaps it was the damned antibiotic.
I looked up the side effects of Amoxicillin and two of the biggest are – drum roll – sleeplessness and stomach upset! So now I’m in a very peculiar position: my teeth and gums are fine but I’m taking the Ibuprofen 800 for the pain caused by the other medication. The classic Catch 22 of drugs: take drug A and then add drug B to counter the side effects from drug A, then drug C to … I purposely avoid going down that rabbit hole by not taking drugs, period.
This is not to say that all people will feel as bad as I do, because my body is very ‘clean’. I don’t use drugs at all – even over-the-counter meds like aspirin, Excedrin, etc. I haven’t had any alcoholic-anything in at least two decades and probably more. And I’ve never smoked (except for a few sneaky cigarettes as a teenager :-). My only toxic habit is a daily Dr. Pepper.
Needless to say, I’m not taking that stuff anymore. In fact, I immediately tossed it into the trash. I’m taking high doses of vitamin C, which fights infections, and some colloidial silver, which is a natural antibiotic. I’m also drinking lots and lots of water, hoping to flush this garbage out of my system as quickly as possible.
The moral to this story: there is ALWAYS a price to pay for taking drugs. Proceed with caution.