You are here: Home / Health / The Cause Of Motion Sickness Is Sensory Confusion 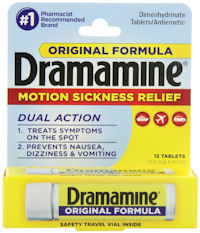 If you want to know the cause of motion sickness – and the cure – you've come to the right place because I am a motion sickness expert! Until I was 11 years old, I lived in Houston, Texas and it was home. Then my father took a new job and we moved to Atlanta, GA, and took our first long car trip as a family: my father, my mother, my brother and myself. Turns out that both my brother and myself had motion sickness and we hadn't gone very far when the vomiting started … we left a trail of nasty objects all the way to Virginia when my mother finally went into a drugstore and bought what the pharmacist recommended. It not only stopped the vomiting, it also knocked my brother and myself out cold. I'm sure my parents were very grateful! That was the start of many awful trips, including a very expensive deep sea fishing trip that I spent in a cabin throwing up. I even got sick riding the bus downtown! It's a thoroughly wretched experience.

What is the cause of motion sickness?

There are many activities that can cause motion sickness: traveling by car, plane or boat; riding a roller coaster, bungee jumping, parachuting and many, many more. But whatever we do, the cause of motion sickness is the same: conflicting messages of your senses. Motion sickness usually happens when one sense tells us that we’re staying in one place and others that we are moving. For example when we’re in a ship’s cabin, our eyes don’t see any movement, but our inner ear probably does. Such conflict of messages is the main cause of motion sickness.

How can I know I have a motion sickness problem?

Believe me, you WILL know!

The symptoms can be easily noticed, but in many cases they can be misinterpreted. When we generally don’t feel well, we have a headache and we are nauseated and this happens on a plane or on a boat – it is obvious that the misery is caused by motion sickness. But when we have the same symptoms in a car, we often think that we just have some stomach problems. We often forget that not only airplanes and boats can cause motion sickness – all kinds of traveling can bring  it on.

What to do in case of motion sickness?

That's easy: get some Dramamine! It solved my problem 100% and my brother had the same experience. In fact, I don't know of anyone who hasn't been helped by Dramamine (although surely there is a small minority who is immune to its effects). We rarely promote medications on this site – even over-the-counter ones – but Dramamine is an exception.

Is there any way to cure it permanently?

The good news is that most people outgrow it. I have and I had a really bad case of motion sickness. Still, I'm in no hurry to go back to sea. But the only 100% sure way to cure it is eliminating the cause of motion sickness. In other words: stay at home. And if you really have to travel, make sure you have some Dramamine to suppress its side effects.