You are here: Home / Health / Exercise Regularly to Reduce the Damage of Smoking 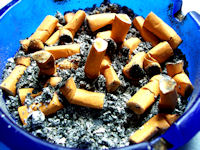 Smoking in general is going to make it more difficult for you to exercise. Not only does smoking make your lungs less effective, but it will make your heart feel the need to work harder than it normally would when you begin to move around.

These two reactions will make you feel fatigued quickly, if you have been a smoker for a long time.

The Benefits of Exercise

By exercising regularly, you will reduce the impact smoking has on your body. In the 2006 study displayed in the Journal of Cancer Epidemiology Biomarkers and Prevention, two different groups of smokers were examined. The women who smoked and exercised regularly were found to be much less likely to develop lung cancer than the women who did not exercise.

Smoking is clearly bad for your health, and exercise is clearly good for your health. While exercise will not eleiminate most of the damage smoking does to you, it does boost your body up to an improved level, as opposed to where it would be if you didn’t exercise.

Exercise will lower your cholesterol levels, while strengthening the lungs and the cardiovascular system. These areas are all affected by smoking, and since they are being increased by exercising, the negative impact of smoking is not going to be as apparent.

Exercising on a regular basis is not going to stop smoking from ruining your body, and eventually you could still end up with lung cancer, or emphysema. However, exercising will make you feel better while being a smoker than sitting still all the time will.

By taking the time to work hard every day, you can improve how you feel physically on a daily basis. If you are exercising because you want to become an athlete, you probably won’t have much luck competing with non-smokers. If you simply want to be able to get by in life comfortably, exercising regularly is going to go a long way to help make you feel less impaired by your addiction.