You are here: Home / Health / GMOs and Their Effects on Our Food Supply 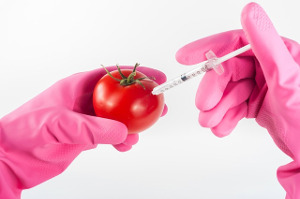 The use of GMOs is defended by the big Agri-businesses on the premise that the resulting crops will be more resistant to insect damage, disease caused by viruses and to adverse growing conditions like cold and drought. These arguments might sound persuasive but there are reasons to suspect that GMOs are not assets to our food supply.

1. The US FDA dismisses questions about safety based on “studies” that, upon closer examination, were conducted by companies who stand to profit from the sales of GMO seeds. Other countries are not so sure about GMO food safety, however, and first world countries like all of the European Union members, Australia and Japan have either banned or restricted GMO foods.

2. Due to the lavish use of antibiotics in the human body, researchers are deeply concerned about the development of “super bugs” that are resistant to our drugs. Since the human system is more complex than that of a plant, it seems likely that stronger and stronger versions of pesticides and herbicides will be needed as GMOs become resistant to the chemicals used to produce our food supply.

3. Crops and weeds have cross-bred throughout history and it seems logical that “superweeds” might appear that will be extremely difficult to destroy.

4. The use of GMO seeds works against the small farmer and often these are the ones who produce our organic food supply. These seeds are patented yet have blown into neighboring fields and the patent-owner companies have sued smaller farmers for infringement or claimed control of their resulting crops thus adding burdensome costs to farming. In a much-publicized case [Monsanto Canada Inc. v. Schmeiser], Monsanto sued a small farmer who grew a field of Roundup Ready Canola, a strain resistant to the Roundup herbicide. Schmeiser claimed that this crop was accidental but the court ruled that “they (Monsanto) have a legal right to control its use, including the replanting of seed collected from plants with the gene which grew accidentally in someone else’s field”.

5. Just like hybrid flowers, GMO seeds cannot reproduce. Due to this sterility, new seed must be bought anew each year. Farmers traditionally save seeds from year to year to reduce costs. The use of GMO seeds will necessarily mean buying from the GMO seed companies – primarily Monsanto which controls as much as 90% of the GMO inventory – each and every year. Further, since crops often inter-mingle, isn’t it possible that these GMO seeds will breed with traditional seed crops and pass on this sterility?

6. Many children in the US, Canada and Europe have allergies that are so severe they may even be life-threatening. According to the San Francisco Chronicle [http://www.sfgate.com/cgi-bin/blogs/sfmoms/detail?entry_id=85498], children’s allergies have risen 18% in the past 10 years. Genetic plants are almost certain to cause new allergies that have never before appeared in the human species. And who knows what other ailments and diseases will be triggered by this unnatural food?

I confess an uneasiness about tampering with nature in such a profound way. Human beings have lived on this planet for at least a million years and have eaten the bounty provided by Mother Nature and have thrived. The last 50 or so years have seen a vast introduction of chemicals into our food supply and diseases have soared. We are tampering with powerful forces and the Law of Unexpected Consequences is certain to offer some surprises in the future. We expect GMOs to provide some nasty ones indeed.