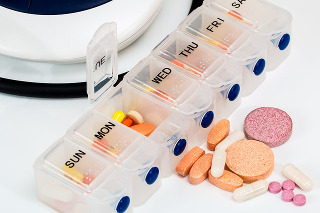 Yep, this is an instant drug test! How is that possible? Well, you know how comedian Jeff Foxworthy says, “You know you’re a redneck when …”? Well, this humorous look at our over-medicated society lets you know if you need help with drugs. It’s by Mike Adams, one of my favorite writers, who excels at poking fun at some of the rampant insanity in our society [http://www.NewsTarget. com/012580.html]. Take it away, Mike!

Medheads – People who take multiple prescription drugs on a daily basis and, as a result, suffer from brain fog. They can be young (ADHD, depression drugs), middle-aged (cholesterol drugs, diabetes drugs) or elderly (Alzheimer’s drugs, osteoporosis drugs, etc.). These are the people you see on the road who drive for ten miles with their turn signal on, who swing wide into the left lane before making a right turn, and who take four full seconds to accelerate after the traffic light turns green. Medheads. Not to be confused with Deadheads (who are actually a lot more fun to talk to).

Black boxer – A consumer who takes drugs that are so dangerous, the FDA requires the drug packaging to carry a large black box warningabout severe harm or death. Black boxers usually don’t care about the long-term harm to their health, they just want the pain (or other symptom) to go away so they can get back to watching prime-time television in relative comfort.

Drug madvertising – The practice of allowing drug companies to advertise patented chemicals directly to onsumers in order to create demand for drugs that everyday people frankly do not understand. Every country in the world bans the practice of Direct-To-Consumer (DTC) drug advertising… except the United States, of course, where consumers are subjected to a never-ending barrage of ridiculous drug ads showing happy, healthy people popping purple pills they would never consume in real life. Of all industrialized nations in the world, only the U.S. (with the ever-caring support of the Food and Drug Administration) endorses drug madvertising.

News repeater – Not be confused with a news reporter, a news repeater is a person who gets paid to pretend to be a member of the press, but who actually just regurgitates whatever health / medical news the drug companies and the FDA are peddling this week. New miracle breast cancer drug discovered! Vitamin E may kill you! Sunlight is deadly! Don’t trust Canadians (or their pharmacists)! Deadly, dangerous Chinese herbs may have possibly killed someone somewhere! Drug companies need billions of dollars in drug profits to find the cure for cancer! Evidence-based medicine is credible! These are the type of headlines constructed by news repeaters.

Fictitious disease – A fabricated disease invented for the sole purpose of creating a new market for patented drugs. ADHD is the prime example of a fictitious disease, and the psychiatric community is now well-practiced at labeling human behaviors “brain chemistry imbalances that need to be treated with chemicals.” Other fictitious diseases include high cholesterol (it’s not a disease, it’s just a symptom), hypertension (also not a disease, but rather a symptom), and even osteoporosis (not a disease, just fragile bones caused by dietary and lifestyle habits that can be easily reversed).

Diseasification – The process of spreading the fictitious diseases through the population. This is how drug companies get rich: by manufacturing disease and convincing people they now suddenly suffer from it. See “Spontaneous Mass Diagnosis,” below. Diseasification is greatly aided by drug madvertising (mass propaganda) designed to change the way people think about health and disease. Fear of public speaking used to merely be a fear. Now it’s a disease, and there’s a drug to treat it. Menopause used to be menopause. Now it’s a disease, too. The former head of Merck, a man named Gadsden, once said he wished to expand the drug market to healthy people, so he wouldn’t be limited to selling drugs only to sick people. He wanted people to take drugs like they chew gum. What a visionary!

Spontaneous mass diagnosis – The process of redefining health in order to instantly label as many consumers as possible with a fictitious disease. Spontaneous mass diagnosis works by moving the goalposts that define a disease state. A “normal” level of LDL cholesterol used to be 130. Last year, a panel of corrupt medical decision makers with under-the-table financial ties to drug companies spontaneously decided that “normal” LDL cholesterol should be 100. Overnight, ten million more Americans were suddenly afflicted with the fictitious disease of high cholesterol. And the treatment for this spontaneous disease? Statin drugs, of course. The aim of Big Pharma is to make sure everyone fits the definition of at least one disease, because the prescription drug lords know that once a person gets on one prescription drug, the inevitable side effects will create other health problems that need to be treated with even more drugs. Instant recurring revenue! Now that’s a clever marketing plan!

The Wall – Short for Walgreens, one of the top street corner pharmacies in America. The Wall is where medheads and black boxers go to buy dangerous drugs to treat their fictitious diseases because they’ve been subjected to spontaneous mass diagnosis.”