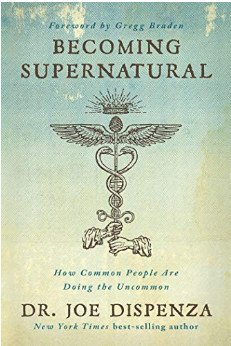 I’m a huge fan of author, teacher and scientist Joe Dispenza. He’s written four books and I’ve devoured them all. Each one is loaded with fascinating and valuable information and I’ve read them all multiple times but I have to vote for his newest book, Becoming Supernatural: How Common People Are Doing The Uncommon, as my favorite. The first three have given me dozens of insights but they’re not not as powerful on the “how to” front. However, Becoming Supernatural is loaded with ways to become – dare I say it? – superhuman.

A NEW MODEL OF HEALTH

I’ve often thought that we need an entire new model of health. Here’s what I mean:

Our current model: wait till we get sick and then try to fix the problem with chemicals and cutting

A new model: STAY healthy and don’t get sick at all

Sure, there is some effort to maintain health. Lots of folks take vitamins, pay attention to their food intake and get some exercise. Those are all great options but they’re not nearly as direct, as powerful, as they could be.

Joe describes an experiment he conducted during a four day workshop with a group of students. He discusses Immunoglobulin A or IgA, as a chemical of the immune system. He says it’s the most powerful chemical defense in our bodies and when we’re stressed, IgA gets depleted and our defenses fail. With the coronavirus in the news every five minutes, that’s a rather uncomfortable thought.

Dispenza and his staff measured the saliva of 117 test subjects, testing for IgA before and after the seminar. The participants were asked to “move into an elevated emotional state such as love, joy, inspiration or gratitude for nine to ten minutes three times a day”.

The results were amazing. Average IgA levels shot up by 49.5% in only four days and apparently the highest marker for most folks is 87 milligrams per deciliter – but some of the people there went up to 100 and beyond.

So, in approximately two hours over only four days, their immune system skyrocketed in power!

But what a price. “You mean I have to enjoy myself, seek pleasure and have fun? Noooooooooo, that’s too hard. I can’t do that”.

I’m kidding of course. Who knew feeling good could have so many physical benefits?

People always assume that we’re more likely to get sick as we get older. Well, what if we’re not? What if we have the wisdom to get into these elevated emotional states on a regular basis – and become superhealthy? It’s food for thought and Becoming Supernatural is loaded with other such treasures.

Home Of +10 Designs
Inspirational Quote of the Day
Everything around you ... was made by people that were no smarter than you.