You are here: Home / Health / Migraine Statistics That Just Might Astonish 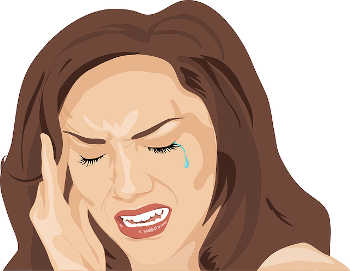 Migraine headaches are such a terrible problem, and we hear about them so often, that we decided to check out some migraine statistics to see just how bad it really is. Some of what we found is astonishing. I’ve had two and I can really relate to our image here that shows a poor woman in tears from the awful pain.

*Over a lifetime, only an astonishing 1% of us escape headaches altogether. Over a year, it is estimated that 90% of the population gets at least 1 headache.

*About 16-17% of the population get a migraine headache sometime in their life  that means over a billion people worldwide at some point get migraine.

*The World Health Organization estimated in 2003 that 303 million people worldwide were “migraineurs”. A 2004 article suggested that there are almost 20 million migraine attacks happening every day.

*According to KidsHealth.org, up to 10% of children between 5 and 15 may experience migraines.

*25% of women and 8% of men get migraines sometime in their lifetime.

*And now for an odd migraine statistic: Neurologists get far more than anyone else  about 57% get a migraine sometime in their life. Now there’s a job I don’t want!

*Before puberty, the incidence of migraines is almost 50-50 among boys and girls. After puberty, the number of women that get migraine headaches far outweighs that of men. By a ratio of 3-to-1 as a matter of fact. Because of this its believed that estrogen may be a contributing factor for getting migraines. However, its also believed that men may be more reluctant to consult with their doctors about frequent headaches.

*People who have migraines as children tend to outgrow them as they get older. Its believed that about 50% of the children who suffer from migraines will stop experiencing them altogether during their adolescence. Another 25% will stop having attacks once they reach adulthood.

*In 15-20% of cases, neurological symptoms occur in advance of the actual headache. These symptoms, which last 20-60 minutes, are referred to as the aura phase of the headache.

*Every 10 seconds, someone in the United States goes to the emergency room with a headache or Migraine.

*Migraine ranks in the top 20 of the world’s most disabling medical illnesses. Amazingly, over 10% of the population, including children, suffer from migraine. Nearly 1 in 4 U.S. households include someone with Migraine.

*About 18% of American women and 6% of men suffer from Migraine. This translates to approximately 30 million people in the United States alone!

*American employers lose more than $13 billion each year as a result of 113 million lost work days due to migraines.

*Omega 3 fish oil is rich in EPA (eicosapentaenoic acid) and DHA (docosahexaenoic acid)  these acids are an excellent migraine relief strategy…..Clinical studies in Denmark, Sweden and the U.S. showed that fish oil reduces both the frequency and severity of migraines. Yet, researchers find at least 85% of American women have diets deficient in omega 3 fatty acids and nearly 20% are so low in EPA and DHA that testing methods are unable to detect any in their blood.

*Quotation about serotonin: “…you can learn to recognize and avoid fluctuations in serotonin levels that affect your moods and appetite. Migraine sufferers can reduce the frequency and severity of their headaches by avoiding foods and activities known to trigger migraines as well as selecting those that will raise the brain’s supply of tryptophan.”
–Carol Hart, in her book Secrets of Serotonin: The Natural Hormone That Curbs Food and Alcohol Cravings, Elevates Your Mood, Reduces Pain, and Boosts Energy

*5-HTP: In one study, 124 people were given 5-HTP (600 mg/day) or the drug methysergide. After 6 months, 5-HTP was found to be as effective as methysergide in reducing the severity and duration of migraines.

*10 million people visit the doctor each year due to headaches Absenteeism and medical care for headaches costs the United States over 50 billion dollars annually.

*Each year more than 4 billion dollars is spent on over-the-counter medications for headaches, many of which are not effective in relieving the pain.

*Every day one out of seven Americans stops or limits their activity due to a headache.

*A study was done by a group of researchers led by Dr. Galina Mindlin of Jefferson Medical College in Philadelphia with migraineurs and “normal” individuals to compare their reactions to weather. The study found that migraines are indeed more likely when pressure rises, and somewhat more likely when the temperature rises.
(For detailed statistics/description, see http://www.personalmd.com/altmedicine_update1.shtml)

*The American Migraine Study showed that more than 85% of women and 82% of men with severe migraines had headache-related disability. The estimated cost of lost productivity is $1-13 billion a year. Male migraineurs (persons who get migraines) required 3.8 bedrest days per year; female, 5.6 days.