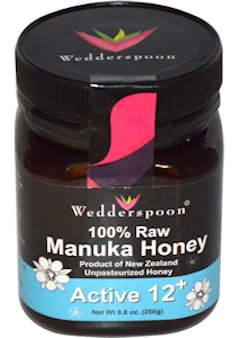 Did you know that if you suffer from herpes or cold sores, your best remedy for painful sores may be … honey. Honey? How can such a common and ordinary substance be a powerful remedy for miserable and painful sores? In fact, it can be used to treat acne, wounds, cuts and sores of all kinds. It truly is magic in a jar.

Studies have compared honey to Acyclovir cream (a common herpes treatment – with side effects, naturally) and researchers were astonished to find that honey did a better job of healing wounds than the drug. And of course, there were no side affects. Of course, those of us who are fans of natural remedies are not surprised. It’s important to note that honey doesn’t cure herpes and cold sores – it just helps the sores to heal. That’s no small thing.

But what kind of honey will help heal these unpleasant conditions?

Manuka honey comes from the manuka bush which grows in Australia and New Zealand.

This wonderful golden liquid can cure as many as 250 bacteria strains, some of which are resistant or impervious to antibiotics. Even the statist FDA approved manuka dressings for wounds and burns in 2007.

No one really knows why manuka is such a powerful antibiotic. The “Unique Manuka Factor” or UMF is the name given to a substance in the honey that no one can identify but is the source of this remarkable healing.

Manuka honey is more expensive than the stuff on the grocery store shelves but it is a bargain compared to drugs and a visit to the doctor’s office. It is definitely the best honey to use for all the wounds and sores that we mentioned above. The manuka honey above is the #1 best-selling manuka on Amazon and has 1000+ reviews. Obviously, it’s helping many.

It may take a bit of looking but unprocessed honey from your local area is your second best choice. We all become accustomed to the flora and fauna in our area and local honey will come from plants that your body is accustomed to. This way there is less chance of any kind of allergenic reaction and as long as the honey is unprocessed it will be superlative at healing any skin problem of any kind.

Many tests have been done on “honeys” on the grocery shelf and the reason they’re usually useless is because they are highly processed. They have been heated to the point that all of the live pollens that make honey useful have been destroyed.

Food Safety News tested honey and states that most of the jars on the familiar shelves contains nothing of any value to the human body – and may have substances that are quite toxic.

Ultra filtering is a high-tech procedure where honey is heated, sometimes watered down and then forced at high pressure through extremely small filters to remove pollen, which is the only foolproof sign identifying the source of the honey. It is a spin-off of a technique refined by the Chinese, who have illegally dumped tons of their honey – some containing illegal antibiotics – on the U.S. market for years.

Food Safety News decided to test honey sold in various outlets after its earlier investigation found U.S. groceries flooded with Indian honey banned in Europe as unsafe because of contamination with antibiotics, heavy metal and a total lack of pollen which prevented tracking its origin.

FSN doscovered pollen was missing in:

The Chinese have been caught “manufacturing” fake honey. They use corn syrup as a base and add coloring and other ingredients and sell the stuff as pure honey. It may sound odd to think of an underground black market in honey but sadly it’s true.

If you think that this doesn’t matter to you because you don’t personally any honey, guess again. Many food manufacturers around the world use Chinese honey in their products and ANYTHING from China is risky because they have absolutely no quality control. Who knows what’s in the stuff?

Real honey that is either from the Manuka bush or is locally grown has many other beneficial uses. For instance it can make a great cough syrup, it squelches dandruff and can’t even be used on your skin to make it more beautiful. If however you are diabetic or you have a weight problem, don’t eat it. After all it is high in sugar. Just keep in mind that it is superb for herpes sores, cold sores, cuts, wounds, all kinds of sores and acne.