You are here: Home / Health / Natural Remedies / The Bizarre Attack of My Father’s “Eye Migraine”

It was fast approaching Friday afternoon rush hour. The highway was growing more crowded by the second, but for now, the traffic was still moving. Cruising along at about 50 miles per hour, surrounded on all sides by other motorists, my father suffered his first ocular migraine attack – more commonly known as an "eye migraine".

Imagine being behind the wheel of a car on an eight-lane interstate full of speeding cars and enormous eighteen-wheelers. Of course, many of the drivers were chattering away on their cell phones, oblivious to the rest of the world around them. And suddenly, my father’s field of vision changed without warning. He said it began as blind spot in the center of his sight. “It’s hard to describe,” he later said, “but it was literally like a hole in my vision. Think of looking at a flower, and then the center of the flower just sort of falls away.”

So this “hole” in his vision started small, but it grew very rapidly. Within seconds, it had expanded until the world was entirely black to him. Miraculously, nobody was injured in the ensuing accident, but my father remained panicked – he thought he had gone permanently blind. About 30 minutes later, his vision returned, unharmed (and completely unapologetic). My father was diagnosed with a variety of migraine that is commonly known as ocular migraines. 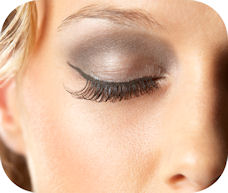 When most people hear the word “migraine,” they automatically think of a pounding headache. Migraines are believed to be caused by fluctuations of the blood flow in the brain. If the blood vessels expand or contract at an abnormal rate, a vascular spasm can occur on the surface of your brain, resulting in extremely painful headaches and other migraine symptoms.

An ocular migraine headache (also called an eye migraine) is a variation of the ‘normal" migraine. It is thought to be caused by the same vascular spasm, except this spasm affects the blood supply to the vision center in your brain.

What Are The Terrifying Ocular Migraine Symptoms?

If you have an ocular migraine, you will have at least one of the following symptoms in one or both eyes – and all of them are terrifying!

Holes in your vision …

This is like what happened to my father. Holes are places where there is … nothing. For example, maybe you can see the outside of the television frame, but you cannot see the picture on the screen in the center.

Does the affected eye see as if you’re peering through a window with rain streaming down it? In other words, this symptom causes your vision to look excessively wavy or watery.

When you look through the afflicted eye, it seems as though you’re viewing the world through a gray veil.

The above visual distortions (known as “auras”) can last anywhere from 10 minutes to an hour. After the auras disappear, a migraine headache may or may not occur. Many ocular migraine sufferers never feel any pain.

Eye migraines are not only terrifying to the sufferer but they are obviously extremely dangerous. My dad could easily have caused a serious wreck on the interstate, one that would hurt, or even kill, multiple people. So if you or a loved one has "migraine eyes", please take it very seriously.

Home Of +10 Designs
Inspirational Quote of the Day
You have to live in your reality so why construct it with negative expectations.