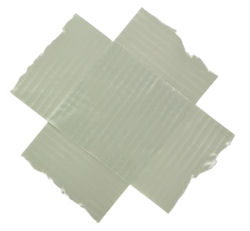 Let’s face it – warts are NOT a fun topic. How many times have you gone to lunch with a friend and said, “Hey, let’s talk about warts.” ;-) Still, getting rid of them IS of interest and some of the removers in the marketplace are quite toxic. But sometimes a piece of duct tape will work wonders. They’re a cheap and non-toxic natural remedy for warts. Sometimes (but not always).

How does it work?

The mechanism of this natural wart removal method is simple. Without air, skin gets weaker and starts to blister. While the weakening of skin cells may make them more prone to viral infection, the virus gets stunned too and slows down its growth rate a bit. After a week the skin can usually be peeled off along with infected cells. In a few months of such treatment all infected cells should have been scrubbed away, effectively ending the infection.

The only problem duct tape remedy has is the fact that it is often unable to kill off all viruses. As the effect, in about 40% of cases this natural wart removal method can’t stop warts from reappearing a few months later and forcing us to start all over again.