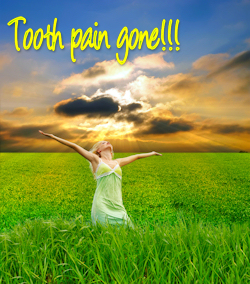 Three days ago I started a report about oil pulling and tooth pain – horrible tooth pain. I am thrilled to report that my oil pulling experiment has been an unqualified success. After pain in my mouth for as long as I can remember, my mouth feels great. Here is my schedule for the last five days – I’m actually writing this on Day 6 and have done my morning pulling, of course.

Is My Tooth Problem “Healed”?

I’m not assuming that my teeth and gums are totally healed. Yes, the pain is gone but whatever the problem is, I know it’s not totally gone. At times I can feel oil dribbling down into my gums. It’s a strange and indescribable feeling but, as you might imagine, I’ve been doing a lot of research on teeth lately. Apparently they’re very porous and contain numerous tubes or “tubules” which are defined as “minute channels in the dentine of a tooth that extend from the pulp cavity to the cementum or the enamel” (wikipedia). It’s most likely that pulp cavity that has been causing so much agony because it’s connected to nerves. Anyway, these tubes are great hiding places for all kinds of nasty bacteria. And these little nasties can’t be reached by toothpaste – or even mouthwash. But oil is, well, oily, and it sinks down into these crevices.

Which Oil Is “Best” For Oil Pulling?

Traditional Ayurveda is the source of oil pulling and they use sesame or sunflower. Lots of modern practitioners suggest coconut which is mild and tastes good. That’s primarily what I’ve been using.

It’s amazing to me how deeply Westerners are in love with “scientific evidence”. There have been many scandals of how scientific data has been manipulated to make the ‘evidence’ point a certain way. Also, the evidence is irrefutable that the INTENT of the study’s designers plays a huge part in the outcome. Furthermore, many studies are just plain flawed in their design, regardless of the creators’ intentions.

But anyway, if you want evidence, check out Pubmed. It’s run by the National Institute of Health and is an index for almost 6,000 medical and biological journals published around the world. I just went to Pubmed and typed in “coconut oil” and was taken to a page with 1495 studies. And as Dr. Bruce Fife points out:

… you can find additional studies by looking up similar search terms like “virgin coconut oil,” “medium chain fatty acids,” “medium chain triglycerides,” “lauric acid,” “capric acid,” “caprylic acid,” and so forth. When you have done that, you will get a listing of over 17,000 studies! How’s that for evidence! Some of these studies, however, will be listed twice. So if we take into account some duplication, that still leaves about 10,000 studies on coconut oil.

I typed in “oil pulling” at Pubmed and found 20 studies.

If you’re thinking that 20 studies isn’t very many, then you probably don’t know that the FDA grants approval to new drugs if only TWO positive studies are published. Vioxx, for example, had only four positive studies before being approved for sale.

But What About Oil Pulling “Dependency”?

One reviewer whined that he might become ‘dependent’ on oil pulling. You mean the way we become dependent on brushing our teeth, combing our hair, eating, showering/bathing or drinking? Too, too silly.

Will Oil Pulling Help My Asthma?

Elsewhere on this blog I’ve written about my experience with Graves Disease or hyperthyroidism. After that highly stressful time I’ve had problems with my breathing and with being breathless. I’ve gone over various checklists for asthma and they’re a perfect description of my problem with breathing. So IF I went to doctors (I don’t) I’m 100% positive they would tell me that I have asthma – and possibly even COPD. Many folks have written that oil pulling helped, or even cured, their asthma. I don’t know if that will happen for me but I intend to find out.

Bottom line: my tooth pain is completely gone and the only possible explanation is oil pulling. I intend to continue using it for a long time and am excited to see what other miracles will occur. My grade for oil pulling …