You are here: Home / Health / What Are Plantar Warts & What Can We Do About Them? 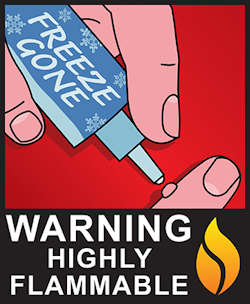 I’ve had a wretched plantar wart on the bottom of my right foot for decades. I’ve had it removed so many times and in so many ways. The worst was a doctor who taped a radioactive pellet to the bottom of my foot. It was excruciating because my toes had to be taped back to (supposedly) keep the pellet immovable. But the wretched thing didn’t stay put and so a few days later I had a large, dead spot … in the WRONG PLACE.

Plantar warts are a kind of warts that appear on the sole of foot. They are usually a few millimeters in diameter and “cauliflower-esque” in appearance, often with black specks in them. Plantar warts are not a different kind of warts – it is just a name for a wart infection of the feet, so you can often observe the warts that look the same on other parts of the body, especially the palms of hands. The optical difference between plantar warts and other types of warts is that these nasty foot warts are pushed inward rather growing outward.

How do you get plantar warts?

Technically speaking, you can get plantar warts exactly the same way as you can get any other warts – through an HPV infection. However, usually the infection spreads through indirect means such as sharing shoes, public showers or (theoretically) swimming pools. The HPV can live for quite a long time even without a living carrier, so some level of caution should be maintained even when there’s no chance of direct infection.

How can they be cured?

There is no 100% effective treatment for plantars warts. They are treated similarly to other types of wards, either by salicylic acid-based over-the counter medications or by cryo and laser surgery. My experience with ‘surgery’ was also abysmal. A doctor treated my wart with an acid treatment – and the resulting pain was so terrible that I couldn’t use my right foot for several days. I had to gingerly put my weight on my right heel and limp along as best I could.

Some people use OTC “cryogenic” wart removers which freeze off the warts. They are flammable, though, and have occasionally been known to burst into flames. Cheery thought.

There is also a recommendation to cover the wart with duct tape, but that didn’t work for me. That doesn’t mean it might not work for you, though.

The bottom line (for me, only): I’ve learned to live with my wart. I have a file which keeps the wart scraped off so that it doesn’t grow and make walking more difficult. Mine doesn’t hurt any more, either.

Supposedly, if left alone, these warts often disappear after about a year, though they may often reappear again without warning. That’s a crock. Mine has been around for a long, l-o-n-g time and I know other folks who have had the darned things for decades.

I wish I had better news, but I don’t. If anyone has any answers, we’d love to hear them.