You are here: Home / Health / The 5 Most Common Alcoholism Myths Debunked 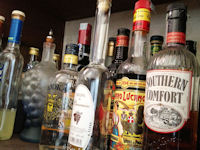 While pop culture is full of characters struggling with a fictional form of alcoholism, there remains many misconceptions when it comes to this serious illness. This disorder was first listed as a recognized illness by the American Medical Association in 1956, and the number of people diagnosed with it each year has only grown. Developing a better understanding of the truth about alcoholism will help you avoid this serious addiction and recognize its signs if one of your loved ones is affected. Here are five of the most common myths about alcoholism debunked.

Alcohol does form a physical dependence when abused for years, but the alcohol itself doesn’t cause the person to start the drinking habit. Root causes can range from emotional issues that require a coping mechanism to the easy access to beer and spirits. Some people seem to inherit their illness due to a long family history of alcohol abuse.

Many people assume that someone struggling with alcoholism will wear ragged and dirty clothes and appear noticeably intoxicated at all times. However, research from the National Institute on Alcohol Abuse and Alcoholism shows that over 20% of alcoholics have challenging careers and manage to hide their struggles while functioning normally to the casual eye.

3. Alcoholics Bring Their Problems On Themselves

Don’t confuse this serious disease with a desire for a drink. Alcoholism is a serious disease, but many people still see it as a simple vice that an individual could give up whenever they please. Breaking the control of alcohol can take years of professional counseling and support according to experts. Trying to go cold turkey can even cause serious health problems if the addiction is advanced.

Alcoholics Anonymous wouldn’t have spent decades developing 12 steps to breaking the power of alcohol if a little extra will power was enough to solve the problem. A person with a cold or broken leg can’t simply power through their issues either. Most alcoholics are already expending extreme amounts of willpower to function well enough to hold down a job and care for their family.

5. There’s No True Recovery From Alcoholism

While some might think alcohol abuse isn’t serious, others are convinced that alcoholism is a permanent condition. There’s no miracle cure, but regular treatment and ongoing support have helped millions of people break the cycle of dependency and live without alcohol for years or decades at a time. Records show that there are over 2 million members in Alcoholics Anonymous alone as of 2011.