You are here: Home / Health / Weight Loss / Emotional Overeating: How To Stop Overeating

Have you ever been so full that you feel sick … but you continue eating anyway? Does it sometimes seem like there is a demon inside of you, one that keeps you eating voraciously, long past any notion of “fullness”? If so, welcome to a very sad and awful club: The Overeaters of the World Club”. If we want to leave emotional overeating behind us, we need to approach this problem in a new way. 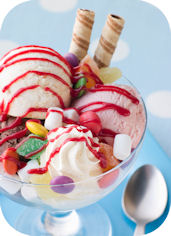 It's clear that overeating is NOT about food – the cause is emotional crap. Sorry for the word, but that's what it is and all overweight folks know it. If that's you, you probably feel that there is something wrong with you. Really wrong. At the very least you're lacking in the necessary willpower to stop gobbling down food. This ongoing problem steals self confidence and cuts down on our interactions and social life.

Psychologists have popularized the word “triggers” which are stimuli or situations that cause us to mindlessly stuff down food – sometimes to the point of sickness. And usually the foods we crave in this mode are carbs, of course. And even better if those delicious carbs contain a substantial amount of sugar. Better to eat a gallon of Breyers chocolate chip cookie dough than deal with our emotions. NOT!

How To Stop Overeating: 4 Reasons Why We're "Addicts"

The dictionary definition of addiction is: “the state of being enslaved to a habit or practice or to something that is psychologically or physically habit-forming, as narcotics, to such an extent that its cessation causes severe trauma.” Sounds like lots of us, doesn't it? I know I've been there in the past (and hope I never see that state again!!!)

So according to researchers, here are four reasons why overeating might become an 'addiction':

Childhood learning: perhaps you, too, heard about the 'starving children of the world” when you were a kid? That was a suggestion that I should eat-everything-on-my-late, although I used to wonder how the amount I ate affected children in other countries?

Food might have been used as a reward? After all, our entire culture encourages the notion that sweets are a reward. What is the main ingredient of a birthday? And we celebrate by going out to dinner. I remember the incredibly silly time when my roommate and I decided to go on a diet – and we celebrated with our favorite black bottom pie.

Unsatisfied physical needs: we sometimes have dietary deficiencies that provoke almost irresistible cravings. A craving for sweets, for instance, can be the result of a biological need for vitamin C. When our ancestors roamed the earth wearing skins, fruit was a major source of C – and the sweetest thing in their culinary lives. They were lucky enough not to have a constantly-available supply of ice cream, cakes, cookies and doughnuts.

Some researchers believe strongly in the genetic influence of overeating. In other words, if your great grandparents were fat, give it up – you're doomed to lots of excess poundage yourself. Personally, I think we learn habits from our ancestors but genetic fatness doesn't pass my personal Truth Test.

Stress: this is the most important cause of overeating – it's even stronger than habit. There are countless ways to reduce our stress and relieving it with food is one of the very worst. Eating away our frustration simply adds more reasons to be frustrated down the line. Of course we already know this.

We all think that food is the problem when someone (us?) is overweight. But clearly that is a symptom, rather than a cause and all the willpower in the world won't permanently stop the binging and overcome overeating. We have to face our issues and take a moment to think before we grab the candy bar half an hour after eating a substantial meal. Until we discover the causes of overeating, and deal with them, we will constantly be at war with ourselves and emotional overeating will be out style until we die.