The Carbohydrate Addict’s Diet is based on the notion that some of us are carbohydrate addicts and this diet is the cure, according to its authors Drs. Rachael and Richard Heller.

There are two ‘Complimentary’ meals consisting of three-four ounces of meat or two ounces of cheese, along with two cups of veggies. 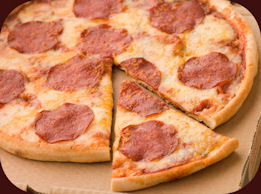 Every day there is a ‘Reward’ meal that can be anything you want. The Carbohydrate Addict’s diet strongly suggests that this meal ‘should’ be healthy and nourishing. However, anything goes – so maybe the pizza party isn’t out of the question. :-)

Another restriction on the Reward meal is that it has to be completed within one hour.

After the first two weeks, the dieter can choose from a variety of eating plans, based on how much weight you want to lose. For instance, some of these plans include a snack … but it’s from the veggie list that is included in the Complimentary meal list.

You are NEVER supposed to deviate from their food list. There’s a five page list that is sacred. Pretty restrictive, I think.

I can respect the two doctors since they claim they have lost an amazing 200 pounds. Personally, I get fed up with researchers who wear a size 0, and have never had a weight problem, instructing the rest of us on how to become thin and lean like they are.

They recommend drinking a lot of water, which is definitely a good thing. Water cleans out our cells and washes away toxins and poisons.

And, of course, the Reward meal will help keep anyone on the diet since it relieves the sense of deprivation that all too often occurs with a diet of any kind.

What I Don’t Like About The Carbohydrate Addict Diet

The idea of a “reward” meal doesn’t sit well. For overweight people to ever become naturally and healthily thin, so that weight is no longer “A Problem”, then we must heal our relationship with food. A reward meal suggests that some meals are unsatisfying and not what we would choose to eat. This isn’t healing.

High protein low carb diets simply are NOT a good idea a way to live. No unbalanced idea is. The idea that we leave our whole food groups is not wise, even ludicrous.

Are You Truly A Carbohydrate Addict?

Diet and weight loss aren’t about ‘rule by committee’ and everyone’s body is different. Still, people I respect, like Dr. Neal Barnard, reject the Heller’s claims of a “carbohydrate addiction” and stress that their science is unsupported. Actually, calorie restriction is the likely cause for any weight lost on the Carbohydrate Addict’s diet.