You are here: Home / Mixed Bag / 16-Year-Old Auburn Boy’s Donation of Pancreas Gives Ephrata Resident the Chance to Feel Like a Young Pup at 57

In our last issue we published a story about the heart-breaking death of a loved 16 year old boy. Today we see the good that came out of that terrible tragedy: the gift of his pancreas.

Ephrata, WA resident Dave Ebberson, 57, was diagnosed with juvenile diabetes at 21 years of age.  Managing his blood sugar became a daily habit, and his disease slowly took its toll.  In December of 1997, this 37 year veteran electrical tradesman received a kidney transplant from the oldest of his three sons.  His disease progressed to the point where he was tired all the time. His blood sugar measurements read like a saw blade with huge ups and downs.  In August of 2000, thanks to a donor pancreas, Ebberson got relief from diabetes.   He received a pancreas from Auburn local Brandon Harney after he died at 16 years of age in a bike accident.
Before the transplant, Ebberson struggled mightily to regulate his blood sugar.   He endured dialysis for 3-6 months before switching to chemo dialysis treatments at night.   After receiving the donated pancreas, Ebberson is free from diabetes.  He sees his nephrologist every 4-6 months for checkups, and his doctor says he's like a 16-year-old kid.  In one way, he is — because that was Brandon's gift to Ebberson and his family. 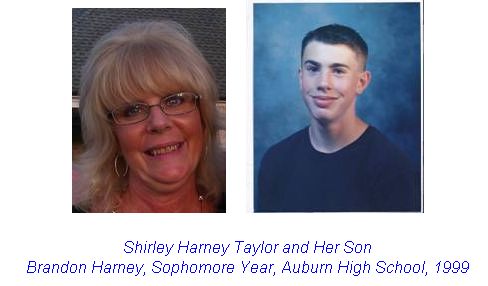 "I feel like a young pup at 57," he says.  "My co-workers can't believe what I went through and how well I am doing today.   I was at the end of the rope.   And I perked right up after the transplant."
Ebberson says he is "more ornery than hell" and knows that he is one lucky boy.   When he needed a kidney transplant, all three of his sons volunteered to donate one of theirs.  When he needed a pancreas, Brandon's gift gave him what he needed to keep on keeping on.
Ebberson met Brandon's mother — Shirley Harney Taylor — about one year after he received Brandon's pancreas.  It was an emotional meeting for both.   "It's a life changing and mind-blowing deal to get a second chance at life and to meet this very sweet gal.  We hit it off right away."
A man of few words, Ebberson feels deep and quiet gratitude to Shirley and for LifeCenter Northwest, the region’s organ and tissue procurement organization.  Because of the profound gift of organ donation, he gets to enjoy more days with his wife Linda of 36 years, his three sons, and two grandchildren by his oldest son — a boy and a girl who are 10 and 8.  "They say cats have nine lives.  I was there."
And, he's still here.
Ebberson will travel to Seattle on December 8 to attend a special event at BECU headquarters lobby at 1 p.m.  Organ Donor Family Member, Auburn Resident and 25-Year BECU Executive Shirley Harney Taylor will put the finishing touches on the “floragraph” of her deceased son Brandon’s face before it is shipped to Pasadena to be showcased on the 2012 Donate Life’s Rose Parade Float entered into the 2012 Tournament of Roses Parade in Pasadena, California.  BECU President and CEO Gary Oakland will make the opening remarks.
LifeCenter Northwest is the federally-designated organ procurement organization for Alaska, Montana, North Idaho, and Washington. Working together to save lives through organ and tissue donation.
Donate Life is a national brand for donation supported by national organizations and state teams dedicated to motivating the American public to register now as organ, eye and tissue donors.  Hundreds of thousands of people from all walks of life in every corner of the country are in need of life-saving and healing gifts that are possible only through organ, eye, and tissue.  The Donate Life Rose Parade Float national campaign is coordinated by One Legacy, the non-profit, federally designated organ and tissue recovery agency serving the seven-country greater Los Angeles area.  It is supported by more than 100 official sponsors nationwide, including organ and tissue recovery organizations, tissue banks, state donor registries, transplant centers, hospitals, funeral homes, and affiliated organizations.