You are here: Home / Mixed Bag / Five Things Your Dentist Will Not Tell You 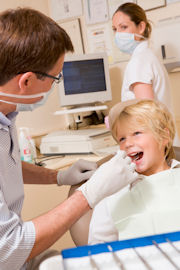 Making regular visits to the dentist is part of a healthy oral care regimen. They advise you on problems, find and repair cavities and perform cosmetic procedures. However, dentists don't know everything and aren't infallible. Plus, many of them are so pressed for time that they may not think to inform you on important matters. Here are five things that your dentist won't tell you.

Mouth breathing is a staggeringly common problem that often begins in early childhood. However, most doctors, and even dentists, won't tell you just how serious a health issue it is. This is often because they aren't aware of it or it's so common that they don't take it seriously. Mouth breathing doesn't just cause impaired cognitive development, breathing problems and physical deformities. It also leads to poor dental health. Excessive airflow into the mouth hinders saliva production, causes the gums to recede and encourages harmful bacteria growth. It also causes misalignment of teeth, enlarged tonsils and greater susceptibility to cavities.

The amount of fluoride required for good health is extremely small and you get sufficient quantities from food. It's fairly alarming, then, that its supplementation is so greatly encouraged. Excessive use of fluoride will actually harm your teeth, causing them to lose their enamel and become weak. Furthermore, fluoride supplementation has been proven to contribute to serious health problems. These include weak and brittle bones, gastrointestinal disorders, neurological problems, kidney damage and arthritis.

Whitening Can be Damaging

While it probably won't damage your teeth to use chemical whiteners occasionally, doing it regularly strips away precious enamel and irritates the gums. Furthermore, it's very expensive. Teeth can be whitened naturally by brushing with turmeric powder or a mixture of baking soda and hydrogen peroxide.

Contrary to popular belief, it's unnecessary and even unhealthy, to brush and floss more than once per day. Too much brushing wears down tooth enamel while excessive flossing irritates the gums. Plus, bacteria takes at least 24 hours to grow to harmful levels. As long as you take care to thoroughly remove plaque and food residue, there's no reason to do this more than once daily.

It's Not Just Sugar

Sugar is horrible for your teeth. It feeds harmful bacteria, producing acids that corrode the enamel from your teeth and cause cavities. However, that's not the only reason why you should avoid soda. Even if it contains artificial sweeteners, soda corrodes teeth due to its high acidity. Deeply colored sodas like grape, cola and root beer will also leave stains on your teeth if you drink them often enough.

Lyndsi Decker is a freelance writer. At the moment she is promoting a Harker Heights dental office as well as dentrix.com. She is also a mother of two and enjoys blogging about a healthy family lifestyle.