You are here: Home / Mixed Bag / Your Household Chores List Can Actually Keep You Fit!

There are lots of people in the 21st century who work at home. Perhaps they’re a mom who stays home with her small children, or a house-husband, or someone like me who works at home and owns their own business. Lots of these folks feel like they’re in really terrible shape and that there’s no way to be truly fit unless they go to a gym. But the truth is that people who stay at home are often more physically involved with life than people who work in an office and sit all day at a desk and whose only exercise is walking to the car to travel between work and home. Who would believe that the weekly household chores list can make them more fit? But it’s true, even though many who work outside the home won’t believe that.

There are exercises we can do at home that aren’t truly considered valuable. Yes, it’s one thing to go for a jog or to pick up a pair of weights. We can feel good about these and believe that we’re exercising our bodies in the right way. But there are daily or weekly chores that will make us healthier and will actually exercise our bodies in a positive way.

This list of household chores will, if done on a regular basis, allow anyone to feel better.

Drag Out The Vacuum

Would you like to have clean floors and use up 200 calories per hour? If so, then grab the vacuum and start collecting all those dust bunnies. Your carpet and floors will look better and you will be using the muscles in your arms, your legs, and even those hard-to-thin-down abs. 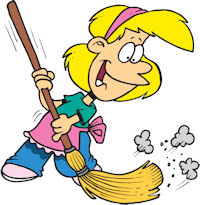 I don’t know about you but if there’s anyting that I hate with a passion it’s scrubbing. The shower stall needs scrubbing, the sinks needs scrubbing, the floors need scrubbing. In 2006, I fell on a kitchen step and broke my wrist and injured my back. The pain was awful and my wrist has a permanent lump on the side. The only way to get rid of the lump is to have surgery. (No way!) And how did I get these injuries? That’s right – scrubbing. So as you might imagine, scrubbing is not something I like to do. Nevertheless, it’s great for our shoulders, arms, and even those pesky abs. The estimate for this hateful activity is approximately 220 calories per hour.

A less hateful chore is dusting. I don’t mind that nearly as much as scrubbing and most people would agree with me. Lots of people like to listen to music while they remove the layers of grime from their furniture and other surfaces. When I do housework, I like to do this chore first because it loosens the joints and burns 150 calories per hour. If you add music and dance to the beat you will burn even more calories.

Sweeping and mopping are chores women have been doing for thousands of years. With vacuums in most homes ,sweeping isn’t a chore we do often. But most of us need to sweep our kitchen before we mop it. Or there is sweeping to do outside in the garage or on the driveway. When we have young children around, these chores must be done even more often. It’s estimated that an hour spent doing these activities will burn out approximately 180 calories – which is enough to eat a small dessert.

Washing (Some Kinds, That Is)

Some kinds of washing burn a lot of calories. Obviously, dumping the laundry and soap in the machine and setting the controls is going to burn just about nothing. But there are lots of other areas of the home that need washing: windows, cars, bathroom surfaces, and 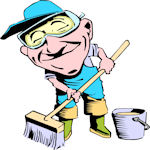 many items like diaper pail or plastic wastebaskets. Depending on where and what ,we wash we may exercise in many areas of the body. For example, if we have to lean down and pick up a bucket we will be working our hips, butt and lower back. Washing a counter in the bathroom will involve our shoulders and arms. Estimates for this activity range in the neighborhood of 200 calories per hour.

An important point to keep in mind … some of us might read this and think, "What’s the big deal? So I work for an hour and burn up a measly 200 calories. That’s only about half a milkshake. Big whoop!" But it’s important to remember that it isn’t strictly a caloric exchange. The idea here is to get your blood circulating and anyone who was informed about physical activity will tell you that the effects of burning calories last for hours.

So we don’t need Wii fitness or a gym membership to be fit and stay at home. Don’t neglect that housework – you will have a beautiful clean home and a more fit body. Who knew there was something really cool about that household chores list?

Home Of +10 Designs
Inspirational Quote of the Day
Freedom can only come to the mind that assumes complete responsibility for the creation of its experience.