You are here: Home / Mixed Bag / In The Path of Hurricane Irma 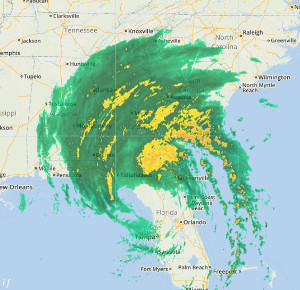 As I write these words, we are in the path of Hurricane Irma. As you can see from the Weather Underground map to the left, it’s directly over Georgia and over we at BlissPlan. We went to breakfast at Chick-Fil-A and it was mostly deserted, which was nice, and there were no problems driving. Actually, it was easier than usual because the streets were so empty.

9AM: It’s raining, 54 degrees and windy, but not too bad, although it’s supposed to get much worse later today. The forecast calls for much heavier rains and wind from 2PM-7PM.

One of the lessons of this storm is that our human predictive power is limited. The forecasts have been all over the board, with promises of up to 12″ of rain at one point. The forecast now is for 2.4″. Also, the weather folks claimed there would be gusts of up to 75 mpg. It was windy yesterday in front of the storm, but nothing even remotely like that. Based on these panic claims, there are tons of closings today, from schools to government offices.

NOON: the rain has lessened but the wind has noticeably risen. Also, the power keeps flickering. Not a good sign. We went out for coffee and it has definitely worsened.

I will have further reports – I hope.

2 PM: it’s really rough here. The winds are very high and this is supposed to continue – or even accelerate – until about 9PM, which is a long way off. And that may be inaccurate, anyway. Our basement used to flood easily, but then we installed a sump pump and the flooding ended. But, of course, if the power goes out, no pump. Fingers crossed.

My ongoing post came to an abrupt end because we lost the power and then only minutes later lost our Internet connection. The electricity came back on in about 2.5 hours but we’ve had no Net connection for 16+ hours. Parts of our area look like a war zone with downed trees and debris everywhere. It’s been raining for over 24 hours but it hasn’t been that heavy. The winds, though, have caused all kinds of damage.

I’m celebrating today because the damn storm is gone!!! Yippee!