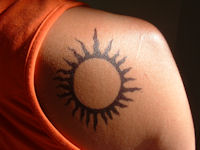 The U.S. Food and Drug Administration issued a warning in late March cautioning spring break revelers, and those planning summer vacations, about the dangers associated with temporary tattoos. Since getting temporary tattoos have increased in popularity, the FDA is finding an increased number of people reporting adverse effects of certain types of temporary tattoos.

The tattoos in question are commonly known as henna tattoos. The problem the FDA is finding is these tattoos are not being made with “real” or genuine henna. Henna, which has been used for centuries as a natural dye for skin, hair, silk, and wool, is derived from the henna plant, a small tree-like plant found in tropical and subtropical Africa and Asia. In the U.S. the FDA has not approved henna for use on skin. It’s only approved as a hair dye.

But, this substance currently being marketed to spring breakers as “black henna” is mixed with a number of additives, such a coal-tar-based hair dye which contains p-Phenylenediamine (PPD). The problem? PPD can react with skin causing redness, rashes, and blistering, all symptoms that can range from mild to severe depending on the person and the concentration of hair dye. The tattoos also leave behinds reddish silhouetting when removed.

While none of these reactions are considered overly dangerous or life threatening, they can still prove to be a major health concern, since reactions can vary from person to person and some may experience reactions at all. Additionally, it’s a major consumer concern as it puts consumer trust solely in the person apply the “henna,” who can choose whether or not to disclose the ingredients used in their products.

What can you do? If you encounter any substance being marketed as “black henna,” there’s a very good chance it contains reactive chemicals and it’s best to avoid application. Since it’s difficult to monitor and regulate, you’ll have to be vigilant.

The time in which a reaction takes to occur can vary greatly as well. Some experienced the adverse reaction immediately up application, while others noticed reddening of the skin and rashes several days to weeks later, so it can be difficult to tell whether or not you’ll have an adverse reaction.

The FDA is asking those who have experienced a reaction to the temporary tattoos, as well as other reactions in general to be sure to contact your doctor or a healthcare professional immediately. They also recommend contacting MedWatch to report your incident.