You are here: Home / Mixed Bag / Reduce Energy Costs: Electricity Savings For Dummies (Like Me!)

We must all start considering ways to reduce energy costs if the "Cap & Trade" legislation passes in Washington. The future of this bill is uncertain but the bottom line is this: our energy costs are expected to double or triple if it is approved. In the really hot, or the really cold, months our energy bills range from $400-$500. This means our bills will range from $800-$1500 PER MONTH! That’s a staggering $9600-$18,000 per year. Many people can’t afford that. In the summer, it will be uncomfortable without air conditioning. In the winter, that might be life-threatening. Obviously, electricity savings will become critical.

At this time, there are really only two realistic ways of heating and cooling our homes without buying energy from the power companies:

Which one you use, of course – or possibly both? – depends on your geography.

The story goes that when Greece was invaded by Rome, the engineer & physicist Archimedes

( c. 287 BC – c. 212 BC) had shields highly polished and reflected them off the Roman legions. This is the first historical use of solar power in our culture. Regardless, there are many advantages to solar power, the primary one being that it’s endless.

When doing my research, I discovered that the common system for solar power projects is called the "Grid-Tie system". It generates solar power to power your home – and sells the excess back to the power companies. This means we can make money with our home solar power system. That works for me!

Cost Of A Solar Energy Setup

What do we need to set up a Grid-Tie system?


Solar panels: the number of panels we need will depend upon how much energy each panel products + geography. A hotter region with lots of sunshine – like here in Atlanta, Georgia – will produce more power than a cooler, less-sunny climate. Atlanta, in turn, has nothing on the southwestern deserts. The job of these panels is to take this solar power and turn it into Direct Current (DC) energy.

Inverters: transforms DC power into AC power, which is used inside our homes

Combiner box: where all the solar connections gather. As best I can tell, this is similar to the circuit breaker in your home.

DC Breaker Box: this solar product allows us to instantly shut down the entire solar system so that it can be maintained.

Grid disconnect: this instantly breaks the connection between our solar system and our home’s electrical system.

Labor: obviously, somebody has to install this system.

Total cost of professional installation: approximately $25,000! Ouch! Costs vary, of course, and it could be much more or somewhat less for your home. If cap and trade passes and my energy bill rises to $18,000 per year, then this system would pay for itself in about a year and a half. Still, that’s a lot of money

What about DIY? Do It Yourself?

The costs of wind energy production are higher to figure because there are more variables. For instance, will your windmill(s) need to sit on a tower? But basically, when the wind blows, it spins the blades of the turbine. a rotor captures the kinetic energy of the wind and converts it into rotary motion to drive the generator. This kinetic energy is converted to electricity that’s compatible with our home system.

A small wind system can be connected to an electric distribution system (grid-connected) or it can stand alone (off-grid).

Usually, a home with a wind system is connected to the power system so that it can get power if needed. If the wind speed drops below 7-10 miles per hour, there will be no electricity production – if above, we will be generating power. If we use a grid system, we can sell this excess power to the utility companies.

One question that concerned me … sometimes we get some really violent winds here in Hotlanta, GA. What will happen to a wind machine in a violent storm? Fortunately, this isn’t a problem since they’re designed not to be damaged by really high winds. 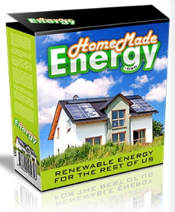 I’ve done a good deal of research on this subject, and this is the best source I’ve found. It’s called Home Made Energy and it teaches us how to create either of the two energy systems: solar or wind. It’s got some silly stuff in it: "Here’s what the Fortunate 500 companies don’t want you to know", Nonsense! There’s no conspiracy here. It’s just the current reality and nobody – NOBODY – spend more resources on alternative energy research than companies that are in the business of supplying power!!!

However, foolishness like this aside, the advice is first rate, according to my son who is going to be installing my solar system for me. The program offers sounds advice on how to save a ton of money with either solar or wind power, depending on your budget and where you live. He claims we can build either system for $200 or less.

Here’s what this program includes:

Specific instructions on what is best to build , based on your geographical location and the size of your house. He adds that it doesn’t have to be an "either/or" – perhaps both system would be best for you.

You will get the step-by-step diagrams on how to create each of the systems with very little effort.

All the components can be purchased from your local hardware store.

For me, the time has definitely come to reduce my energy costs and my son is building a solar system for me, based on the directions from Home Made Energy. Since the average cost is around $25,000, this is definitely a project worth a bit of time and money. Progress reports to come!