You are here: Home / Mixed Bag / Review: Reality Is A Buffet Of Frequencies You Get To Sample, The Multiverse In Action 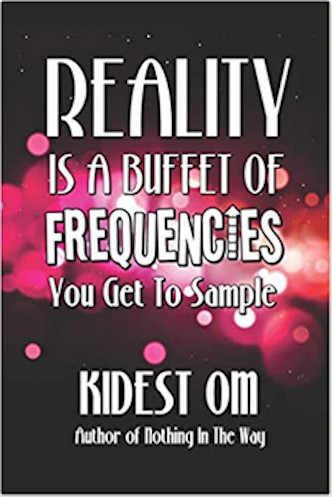 Reality Is A Buffet Of Frequencies You Get To Sample is an amazing, deep and incredibly exciting book by author Kidest Om. The subject is the “multiverse” or the “many worlds theory”. In the 1950s physicist Hugh Everett proposed this theory which avows that there isn’t one linear universe, as we all believe. Instead, there are – literally – infinite universes and you are living in thousands, perhaps millions, even trillions of them. And you are in all of them.

It isn’t what our senses report and you might be inclined to yell, “BS”. But the proof offered by quantum physics is powerfully convincing. I can’t evaluate the scientific avidence since my science is so limited. And anyway, I don’t want to. I’m interested in what the multiverse means to our human lives. I personally see evidence for it everywhere. Let me give you an example.

I woke up around 2AM to a truly frightening storm. My bathroom has a skylight and the hail was so intense I wondered if it would break through into the room. Outside was a war zone of lightning and thunder, peal after peal, very close. The wind was blowing so hard that the house was shaking and the rain was torrential. For some reason, I calmly raised my arms over my head and as I brought them forward I loudly ordered, “go!”. The instant I finished speaking, there was only a soft, gentle rain. To be clear, the storm didn’t fade away or move on. It disappeared. The hail, gone; the lightning, gone; the wind, gone: about 90% of the rain, gone. INSTANTLY.buffet

For some reason, this seemed natural to me at the time so I went back to sleep immediately. But the next morning was a different story. How did this amazing miracle occur? After much thought, it seems that there are only two explanations. The first is that I am a powerful sorceress who can command the weather. Uh, no. Or, I moved into an alternate universe like described in this marvelous book. After reading Reality Is A Buffet of Frequencies, I am totally convinced that is what happened. If anyone has another explanation I would love to hear it?

Quantum physics has been around for 100+ years but our cultures are still using the outdated Newtonian model and it’s difficult to find information on the multiverse. I’ve found a couple of books that are so dense with science and math as to be incomprehensible, at least to me, a non-scientist. Others are shallow and superficial. But not this one. It isn’t really a book. It’s like streaming wisdom from a source that is far above the ‘normal’ model. If someone offered me $1000 for my copy of this book – and I couldn’t buy another one – I would turn him down. I’m almost through with my second reading and when I finish I will begin my third passage through. It is so deep and so rich that cannot be ‘finished and done’ any time soon. At the same time, it is so hopeful and so exciting.

I’ve been a student of the law of attraction and “create your own reality” for years but honestly that seems a bit primitive and elementary compared to the model offered in this book. Kid says that instead of reality creation we can go reality surfing, which is much easier and potentially much more rewarding. I can’t thank you enough, Kidest Om, for these glorious teachings. You have my eternal gratitude. The Power of Now used to be my #1 book, but now longer. This is IT.