You are here: Home / Mixed Bag / The Healthiest Places on Earth 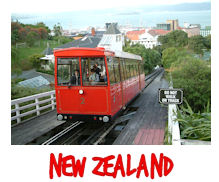 With today’s ever-growing and moving population, the environment is becoming more and more polluted. The air is filled with obnoxious fumes, water is contaminated, rubbish is practically everywhere. This is probably the main factor that makes people want to seek a better place to spend the rest of their lives in. A clean environment that will help them lead a healthier life and prolong the actual life duration. If you are one of the many that would like to settle in such a place, consider the following suggestions, which are actually considered the healthiest places in the world.

With a population of a little over four million, pollution-free environment and marvelous landscapes, the land of the kiwis is a long way from the northern part of America. In a place like this, embracing a healthy lifestyle is much easier.

Whoever moves to New Zealand is sure to find less stress, and will benefit from an affordable (and often free) health care. Life expectancy is 80 for women and 85 for men.

Once there, you can indulge in many activities that will keep you fit and in good shape. Most practiced are hiking and walking. Plus, no matter where on the island you live, the ocean is not more than a ninety minute drive away.
Also, it’s easy to stay healthy thanks to the affordable healthy food. You can even catch seafood yourself, while organic veggies and fruit are grown by almost everybody.

Few places can match the Valley’s low cost living and highland’s scenery. These two factors, plus many more, contribute to a healthy lifestyle. People in this region tend to live up to eighty and even ninety years of age, while the average life expectancy in Panama is about seventy-seven. For that, inhabitants of the Volcan area have the fresh produce and the spring-like weather to thank. Shangri-La Valley attractions also include berry stands and thermal springs. The life pace is so serene, that it is practically impossible for one to feel stress.

Sardinia is an island off the Mediterranean coast of Italy, with a population of 1.3 million people. Italy’s Prime Minister Silvio Berlusconi owns a villa there. Despite his 73 years of age, he is in pretty good shape. Probably it’s because of the climate over there?

There are a couple of close-knit villages in Sardinia’s interior where plenty of centenarians reside. Most of them live with one or more family members. Men lead the same lifestyle they have led for the past scores of years. They walk a couple of miles each day and have similar diets: fava beans, garlic, tomatoes, olive oil, whole grain flatbread and pecorino cheese, which is high on Omega 3. Meat is often ‘reserved’ for Sundays only.

Nicoya, situated on Costa Rica’s Northwest coast, is a so-called Blue Zone. Researchers and scientists call that countries which have a big percentage of people that live up to the age of 100 and even beyond. Residents of Nicoya live longer than anywhere else in the world. There are a couple of key reasons for that:

1. Proper diet, which consists mainly of beans and high fortified corn. They are high on fiber and really healthy. Not only do they eat right, but they also have light meals.
2. Hard water with a big percentage of calcium, which strengthens the bones.
3. Focus on the family. The centenarians of Nicoya spend their lives as couples – with children or other members of the family, who give them support.
4. Dry climate, which contributes for less respiratory diseases and a lot of Vitamin D.
5. Social life. People often meet with and get visited by friends and simply love being around people.
6. Work. All centenarians enjoy working, for that gives them a sense of being useful to themselves and those around them. They want to contribute and love being needed.