If you want to give your poor over-fed, yet under-nourished, body a surging boost of much-needed enzymes and minerals, the easiest way to do it is with a couple of glasses of freshly-squeezed juice each day. The SAD (Standard American Diet) fare that we all consume with such gusto is not-only devitalized but also loaded with chemicals. When food is cooked to death and then loaded with preservatives, it can’t do a darned thing for us except fill us up. But the problem is that we need a juicer to take advantage of this bounty and they can be quite expensive. The Jack Lalanne PJP Power Juicer Pro Stainless-Steel Electric Juicer

is one moderately priced juicer that will give good results. 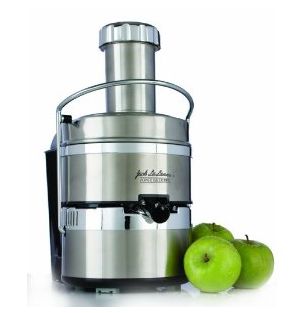 Until he recently died, Jack Lalanne was the original poster child for healthy living. Decades before the current crop of fitness “gurus” lifted their first weight (or were even born) “the godfather of fitness” was winning contests, writing books and acting as a model for nutrition and exercise. Like so many of us, his early years were focused on junk food … until he attended a lecture by world-famous Paul Bragg (I use Paul’s amino acids frequently). Like the ancient Greeks before him, Lalanne became convinced that civilization depends on a healthy and physically-fit population and he was determined to do his part to bring this about.

Born in 1914, by age 21 he opened one of the first fitness clubs in America. That doesn’t seem like such a big day today, but it was quite daring for the time. He invented exercise equipment, had his own show on TV for many years and produced multiple series of videos. Unlike many who focus on ‘body building’ as being only for young guys, Lalanne promoted strength and power to seniors and women. Yeah, Jack.

One of the more amusing anecdotes about Lalanne is that when he was 54 he defeated then 21-year-old Arnold Schwarzenegger who called him an “animal”. (I’m not sure if that was meant to be a compliment or not. :-)

It’s not surprising that someone as dedicated to fitness and health as Lalanne would have his own juicer.

* The finish on this juicer is stainless steel, which I personally like. If you don’t like the “techno” look, though, you might be turned off by it, though.

* Likewise, the mesh is made of stainless, which makes it easier to clean. Scrubbing this piece is ALWAYS the worst part of the clean-up chore.

* The motor is a decent size – 250-watts – and it turns at 3,600 RPM. I confess that I don’t really understand what any of these specs mean except that it will juice a lot of fruits and veggies. If your motor is too weak, then you will end up with a Giant Mess.

is centrifugal. I know that sounds good but I don’t really know what it means so I looked it up. Here’s one definition: “A centrifuge is a piece of equipment, generally driven by an electric motor (some older models were spun by hand), that puts an object in rotation around a fixed axis, applying a force perpendicular to the axis.”

More usefully, it means that the fruits and veggies are forced away from the center, which is definitely a good thing. If all the pulp and juice piles up in the middle it’s like a traffic jam on I-85 in the heart of Atlanta.

* According to the manufacturer, there is an extra large feed chute which translates into less chopping of veggies and fruits since the pieces can be larger.

>> What Can I Juice in the Jack Lalanne Power Juicer Pro?

The best way to evaluate any juicer is by mentally dividing your produce into categories like Firm, Medium and Soft. These aren’t absolute, of course, but they’re a great frame of reference. For instance, cantaloupe or honeydew can be either Medium or Soft, depending on how ripe they are.

Firm: this includes fruits and vegetables like carrots, squash & zucchini, sweet potatoes, not-too-ripe pears, apples, celery, beets (I don’t like beets at all, but there’s no doubt they’re loaded with healthful vitamins and minerals). These are the easiest to juice and the Power Juicer Pro does a good job with them.

Medium: citrus fruits are medium, as are ripe peaches, nectarines, pineapple and cucumbers. Apparently the Jack Lalanne Power Juicer Pro is OK with these. The after-juicing pulp retains too much juice indicating that it’s not perfect.

Soft: this category includes berries, watermelon, grapes, tomatoes and really ripe fruits. This is where most juicers can’t cope – except for the really expensive ones – and the Power Juicer Pro won’t work on these. My Green Star will break them down, but again it’s $250 more expensive.

And there is produce that is no good for juicing because it just doesn’t produce enough juice. Bananas are the prime example.

Green juice is a controversial subject in the juicing world. This includes, watercress, arugula, lettuces of every kind and spinach … and the worst tasting food on Planet Earth in my opinion: wheatgrass!!! These are incredibly healthy – but they are quite bitter. I don’t like them myself, although I will usually throw in a few leaves just because I think I should. As far as the Power Juicer Pro goes, green irrelevant because it can’t handle them. If you want green juice, there are lots of powdered green juices on the market that include multiple greens and are organic. That’s what I use. Perhaps not quite as healthy as the fresh, and it certainly doesn’t taste good, but I drink them as I would medicine.

* It’s quite inexpensive. If the juicer is much cheaper than this, it will most likely juice so few things that it will be useless.

* It will go in the dishwasher – except for the base, of course.

* It isn’t too noisy. Some of them sound like the space shuttle revving up for takeoff but apparently this one does not.

* It does a good job for this price range. Yes, there are more efficient juicers but you will pay much more for them.

>> What Users Don’t Like About the Jack Lalanne Juicer

* As already mentioned, it doesn’t work well with really soft fruits and vegetables, but that’s no surprise. The soft stuff is the acid test for any juicer. A reviewer on Amazon complained that he spent 1 1/2 hours trying to juice some canteloupe. Sorry, fella, but I consider that a really stupid waste of your time. If the melon didn’t juice in the first few minutes, it’s obvious that it’s not going to do so. Move on.

* If the feed chute isn’t covered, pieces of produce may come flying out. This isn’t a problem, though, if you pay attention to what you’re doing.

* Perhaps the weakest link is the plastic screw peg where the filter and blade are attached because it has a tendency to break if the user doesn’t take care.

the penultimate, absolutely-most-fabulous-juicer-of-all-time? No, it isn’t. But to acquire this mythical juice you might have to spend $2000 – or even more. Instead, this is a very practical juice for those who don’t want to spend a fortune on a machine because it’s quite affordable and does a good job as long as you are aware of its limitations.