You are here: Home / Reviews / My Friend Wouldn’t Have Cut Off His Thumb With The Rikon 10-325 14 Inch Deluxe Band Saw 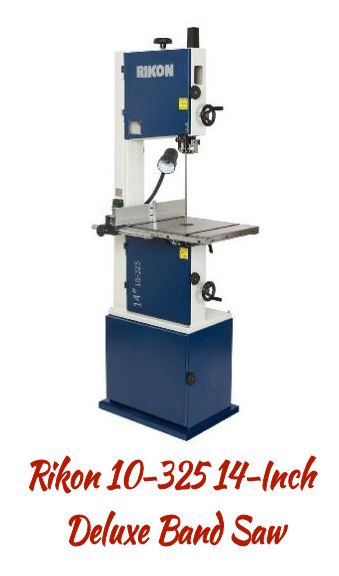 One night several years ago, I was working with church members on a barbecue. Our group was irritated when our leader didn’t show up for all the work we were doing on a Friday night. The grumbling was loud. The next day, though, we all felt guilty about our annoyance because it seems that the day before he had cut off most of his thumb with a saw! He was an experienced builder, too. Since that time we’ve bought the Rikon 10-325 14-inch deluxe band saw in the hopes of that horror not happening to us. Still, I flinch whenever my son fires up the saw. So far, so good.

The Rikon 10-325 14-inch deluxe band saw is an award-winning table saw that is treasured by everyone who works with wood, from the rawest apprentice to professional furniture makers. But what makes this saw so very special?

#1: The saw includes a large, cast iron work table which increases safety since the saw won‘t move and fly toward or away from its operator. This is VERY important!

#2: The blade tracking and tension windows allow users to be as safe as possible while aligning the blades. This is a Big Deal to Rikon bandsaw owners as this customer states:

When I actually saw the old style (cast iron frame) band saws next to the Rikon Deluxe 14 saw, it was immediately clear that this machine is in a separate class–there‘s no comparing the cast iron frame saws to this beast. It‘s bigger, more refined, has as much power as the best of them, and has a huge resaw capacity (that exceeds the cast iron models with riser block installed).

#3: The cuts are so accurate that the Rikon 10-325 can be used to make any kind of decorative cut.

#4: With two inches of access allowed by the hinged blade guard, this saw is easy to operate.

1. The weight and solidity of this saw make it very safe – but also make it heavy. Depending on your size, you might need some help setting up the Rikon 10-253.

This machine is shipped in one carton that weighs in just short of 260 lbs. I am not a weak person but found it a bear to manipulate. 2 cartons, 1 containing the saw body and 1 containing everything else would be more reasonable. Unpacking the saw I would suggest you take everything but the saw out of the carton then stand the carton up and walk the saw out rather than trying to lift it out of the box. You will tear some cardboard and foam packaging but it is much easier and safer than trying to lift the unit out.

2. Don‘t expect to set this saw up in the 20 minutes at halftime. This is a serious machine for serious users:

When I bought the saw, the salesman told me to allot about 8 hours for assembly and alignment. He wasn’t lying. While nothing is very complicated, it is time consuming if you want to do it properly and a machine of this quality warrants the attention.

3. Some customers were less than impressed with the manual.

Most of the customers who purchased and used the Rikon 10-325 14-inch deluxe band saw were extremely satisfied with the performance, durability, and price. Users say the Rikon band saw is a heavy-duty and high quality saw that can handle most jobs thrown at it.