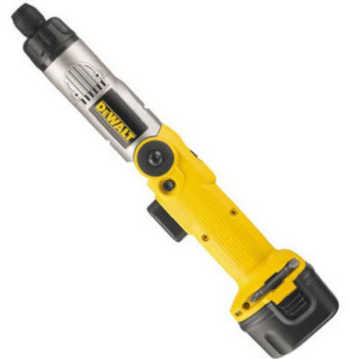 The Dewalt DW920K Screwdriver Kit is ideal for fastening applications and offers heavy-duty construction, variable speed and a 7.2-volt battery pack for longer running time. The kit comes with two batteries, a kit box, a charger, and a screwdriver bit.

The screwdriver is powerfully compact and is capable of delivering 80 inch-pounds of maximum torque output. Versatility is catered for by its variable speed of 0-500rpm to perfectly match whatever job you need the tool for.

You can use this screwdriver to boost productivity by taking advantage of its industrial quick-release, electric break, and battery pack.

The Dewalt DW920K Screwdriver Kit has received very positive feedback at Amazon.com and currently has a review rating of 4.7/5 stars.

The Dewalt DW920K Screwdriver Kit is the most popular product in the ‘drills’ category at Amazon.com and hasn’t received much in the way of negative feedback. We will now discuss some of the criticisms put forward by its customers, which have been classed as annoyances rather than features that detract from the value of the product.

One of the common comments made by the reviewers is in regard to its quick release design. This feature allows the user to release the bit by pushing the sleeve of the screwdriver back. While this is a helpful element, it is quite sensitive, and has proven to be easy to accidentally trigger for a number of customers. For example, you will have to be careful when you are putting it in your belt, or dropping it into your bucket, or bumping it, that it doesn’t release the bit and shoot it across the room.

Another thing to be aware of is that some reviewers have found that the shape of the battery can make it somewhat awkward to use in the straight position.

As we have stated, the Dewalt DW920K Screwdriver Kit has received a huge amount of positive feedback and we will now attempt to summarize the main features and benefits that the customers have reported.

The screwdriver’s torque is one of its most popular attributes and the reviewers have been really impressed with its ability to set screws into a variety of materials. It has proven to be very powerful and the customers have experienced great results driving drywall screws among others.

The screwdriver’s torque adjustment has also pleased many. The adjustment steps are nicely spread out, which the reviewers appreciate. Similarly, the variable speed of the product has made it easy for its users to ‘start’ screws.

The battery charger has made a positive impression. You can completely charge a depleted battery pack in under an hour and you can also leave the battery in the charger without risking any damage to it. It has been reported that the charger is light and is easy to carry around.

Other compliments made for the product include that it is powerful and yet small enough to be used in hard to reach places, that it is durable and will function flawlessly after extended use, and that it is highly affordable when compared to other similar products, especially when you take the included accessories into consideration.

Would we recommend the Dewalt DW920K Screwdriver Kit to our readers? Certainly, and here is why …

Based on the Amazon.com rankings alone, this is the product you should purchase if you need an industrial screwdriver. The customer reviews for the product have also been very impressive, with many users reporting that this is the best cordless screwdriver available.

We encourage our readers to at least examine the overwhelmingly positive customer feedback for the product to determine whether they should invest in this well balanced, controlled, lightweight, and strong screwdriver. Click on the Amazon link above to find more information to help you make an informed buying decision.