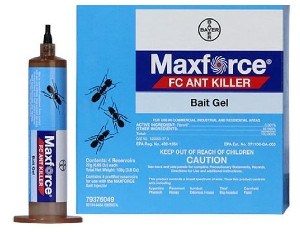 Three or four times each year we are invaded by ants. They’re the little black sugar ants and up until now we’ve been using Terro ant poison. The Terro site says that we have to go through four cycles of ant life to be rid of them – for a while.  Of course, they’re always centered around the kitchen and there are LOTS of them. But this last cycle has been going on for  – literally – months! It’s gotten very tiresome because they get into everything and scouts wander all over the house. So we finally decided to try something else.

Bringing Out The Big Guns

In many ways, I admire ants. They’re hard-working, very industrious and quite persistent. But having them invade every space in the house just isn’t acceptable. So we decided to try Maxforce FC Ant Bait Killer and the results were astounding! It was easy to find the trail from the outside where the ants were coming in and we plastered the poison all over the trail and the entry through the brick into our home. In ONE HOUR all the ants were gone inside! That was Saturday afternoon and this is Monday afternoon and in that time we’ve seen three ants wandering through the kitchen. There are still some outside but they have obviously been decimated since there are only a few and they’re still eating the poison – outside.

💗 I read that there are 10,000 species of ants so this raving review is only for the black sugar ants. In fact, they’re not even listed on the package or directions but other reviewers said this worked with them and they are so right. I don’t know if it’s as effective with other species.

💗 This stuff is a gel and when my son put out the first batch part of it was liquid and ran down his hand and arm. It had been riding around in a postal truck on an 80 degree day so we let it cool off and used it on Sunday and it remained a gel. It’s very toxic so you don’t want to get it on yourself so be careful.

Evaluation: Maxforce FC Ant Bait Killer is The Bomb! It gets an A+