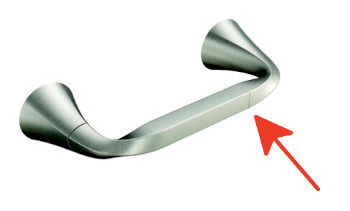 When I first saw the Moen Oxby Brushed Nickel Wall Mount Pivot Toilet Paper Holder, I was enchanted. My shower has been redone and this toilet paper roll seemed like a perfect choice. And there’s a lot to like about it.

1. My shower faucet and door are nickel and this toilet paper roll matches so well.

2. It’s BEAUTIFUL! It’s sleek, yet simple – I don’t like ornate. Its design will never go out of style.

3. The way the toilet paper roll is installed is way cool. Look at the arrow on the image … the arm swivels up, load the paper and swing it back down. No more spring-loaded rolls. 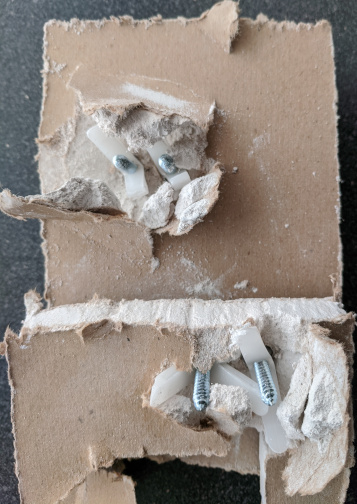 Installation is unbelievably awful! In fact, just about impossible. First, you install the two brackets on the wall. No big deal, right? Except that it IS a big deal because they’re attached with two drywall anchors which are so close together that they literally chew up the drywall. There was no way to solidly attach those anchors. They kept spinning and coming loose and when you consider that there is a lot of stress on a toilet paper holder, because of tugging on the paper, it was just a matter of time until they ripped loose from the wall. Look at the image to the right and you can see how torn up the sheetrock was. Besides, the anchors are PLASTIC. Nope, want metal ones

My contractor tried several methods to attach the darn things but nothing worked. He finally patched the wall and we decided to find something else to use.

However my son *finally* got got the darn thing securely mounted on the wall, but it was a lot of work.

✼ Measure for a whole in the drywall
✼ Cut the hole
✼ Measure a 2″x4″
✼ Cut the 2″x4″
✼ Attach L-brackets to the board
✼ Attach the board to the studs – this was the trickiest part because of the difficulty of working in this small hole, plus there is an electric wire right there 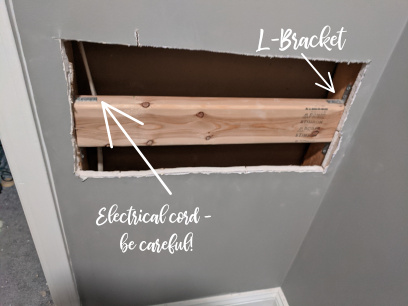 Now the roll is attached to the 2×4 with wood anchors and it’s firm and solid. But what a hassle.

I read some reviews on Lowe’s website and buyers said that installation was ‘easy’. Don’t believe it!!! At least, not if you’re planning to attach this toilet paper roll to sheetrock.

So now I have my Moen Oxby Brushed Nickel Wall Mount Pivot Toilet Paper Holder securely fastened to the wall, and it’s pretty and all that, but I would never have bought it if I had realized what an ordeal this would be.