You are here: Home / Self Help / Joseph Murphy & the Subconscious Mind: Why Your Life Is the Way It Is and How to Change It, Part 3 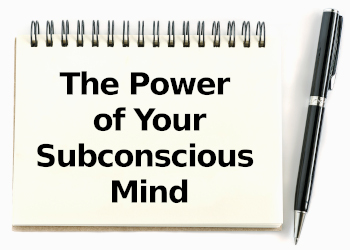 We are continuing our series on Joseph Murphy, your subconscious mind and how to make it work for you. The Power of Your Subconscious Mind, also by Joseph Murphy, contains a longer and more explanatory treatise on this most-powerful mind, but this 10 part series includes one of his shorter works, The Miracles of Your Mind, which is a great intro to his classic book. Here is the beginning of this series: part 1 and part 2

In using the subconscious mind you infer no opponent; you use no will power. You use imagination, not will power. You imagine the end and the freedom state. You will find your intellect trying to get in the way, but persist in maintaining a simple, child-like, miracle-making faith. Picture yourself without the ailment or problem. Imagine the emotional accompaniments of the freedom-state you crave. Cut out all red tape from the process. The simple way is always the best.

Remember that your body possesses an organic mechanism reflecting the interplay of the conscious and subconscious mind; viz., the voluntary (cerebro-spinal nervous system) and the involuntary nervous system. These two systems may work separately or synchronously. The vagus nerve connects the two systems in the body. When you study the cellular system and the structure of the organs such as eyes, ears, heart, liver, bladder, etc., you learn they consist of groups of cells which possess a group-intelligence whereby they function together, and are able to take orders and carry them out in deductive fashion at the suggestion of the master mind (conscious mind). This is why the group intelligence of the lungs responded to the constructive, positive suggestions of the psychologists previously mentioned in this chapter.

In this book our purpose is to remove the mystery of the workings of the mind, in order to know better its modus operandi. In the relaxed state the subjective mind comes to the surface, and begins to work on the correct patterns suggested by the healer. The kinetic action of the mind comes into play by way of the vagus nerve. Between sleeping and the waking state the mind breaks through from its material thraldom and the limitations of time and space, and asserts its innate freedom.

Dr. Evans, a student of Quimby, was able to suspend the conscious mind, and by an interior illumination, attended with no loss of consciousness of external surroundings, was able to diagnose disease.

Clairvoyance is one of the powers of the subconscious mind which enabled Quimby, Dr. Evans, and many others to clearly see the internal structure of man, the nature and extent of the disease, plus the cause behind it; this proved a great aid in their healing of patients. The explanation of the mental and emotional cause of their ailments was the solution in most cases. The usual procedure is as follows:

1. Take a look at the problem.

2. Then turn to the solution or way out known only to the subconscious mind.

3. Rest in a sense of deep conviction that it is done.

Do not weaken your treatment by saying, “I hope so!” or “It will be better!” The cellular set-up of your body will follow faithfully and honestly whatever blue print the conscious mind hands over to them via the subconscious, sometimes called subjective, or involuntary mind. Your feeling about the work to be done is “the boss.” Know that health is yours! Harmony is yours! Become intelligent by becoming a vehicle for the infinite, healing power of the subconscious mind.

The reasons of failure are: Lack of confidence and too much effort. Suggest to the subconscious mind to the point of conviction; then relax. Get yourself off of your hands. Say to conditions and circumstances, “This, too, shall pass.” Through relaxation you impress the subconscious mind enabling the kinetic energy behind the idea to take over, and bring it into concrete realization.

A careful study of the single-celled organism shows us what goes on in our complex body. Though the mono-cellular organism has no organs, it still gives evidence of mind-action and reaction performing the basic functions of movement, alimentation, assimilation, and elimination. Dr. Alexis Carrell’s findings in heart experiments of chicks are significant, pointing to the basic finding that life functions despite the lack of complete, organistic equipment.

Dr. Murphy once again states his Knowingness that the subconscious mind is the source of all our creative powers. He is certainly not alone in this for many modern teachers not only agree with him but use science to prove the truth of what he declares. Two of my favorites are Dr. Joe Dispenza and Bruce Lipton.

The subjective self within you works continuously for the general good, reflecting an innate principle of harmony behind all things. Study the works of Edison, Carver, Einstein, and many others who without too much outer education knew how to tap the subconscious mind for its manifold treasures. Have a reason for the faith in you. You cannot get very far if you do not believe in what you do not see. I do not see love, but I feel it; I do not see beauty, I see it manifested. Subjective faith is often greater in a puny body of a garret-loving poet than in the stronger frame of a prize fighter. Our greatest failing is a lack of confidence in the powers of the subconscious mind. Get acquainted with your inner powers.

Of what use is it to know in principle that you are perfect if you cannot bring it out? Self-realization, plus feeling, is the only key to healing. To get results is no proof your method is scientific or sound.

I knew a man who was told to wave a rabbit’s foot around his head seven times, and a big wart would fall off. He believed it, and the result followed. The rabbit’s foot had nothing to do with it; it was due to a law of mind. Mental acceptance and belief were the causes, and the disappearance of the wart was the effect. If you are tense and anxious, the subconscious mind will pay no attention to you in a tough situation.

A house-owner once remonstrated with a furnace-repair man for charging two hundred dollars for fixing the boiler. The mechanic said, “I charged five cents for the missing bolt, and one hundred and ninety-nine dollars and ninety-five cents for knowing what was wrong.”

Similarly, your subconscious mind is the master mechanic, the all-wise one, who knows ways and means of healing any organ of your body, as well as your affairs. Decree health, and the subconscious mind will establish it, but relaxation is the key. “Easy does it.” Do not be concerned with details and means, but know the end result. Get the feel of the happy solution of your problem, whether it is health, financial, or employment, etc. Remember how you felt after you had recovered from a severe state of illness. Bear in mind that the feeling is the touchstone of all subconscious demonstration. Your new idea must be felt subjectively in a finished state—not in the future—but as now coming about.

One of our students who attended our lectures on The Miracles of The Mind had severe eye trouble which the doctor said necessitated operation. He was instructed how to use the Nancy School technique: Take a little phrase or affirmation, easily graven on the memory, and repeat it over and over again like a lullaby.

Each night this man, as he went to sleep, entered into the drowsy, meditative state, the state akin to sleep. His attention was immobilized and focused on his eye doctor. He imagined the doctor was in front of him, and he plainly heard, or imagined he heard, the doctor saying to him, “A miracle has happened!” He heard this over and over again every night for perhaps five minutes or so before going to sleep. At the end of three weeks he went to the ophthalmologist who had previously examined his eyes, and he said, to this client, “This is a miracle!” What happened? He impressed his subconscious mind, using the doctor as an instrument or a means of convincing or conveying the idea. Through repetition, faith, and expectancy he impregnated the subconscious mind. The subconscious mind made the eyes; within it was the perfect pattern, and immediately it proceeded to heal the eyes. This is another example of a miracle of your mind.

Chapter 3: THE SUBCONSCIOUS MIND AND ALCOHOLISM

THE ALCOHOLIC is mentally ill, and he needs a mental overhauling. The problem drinker, the compulsive drinker, or the habitual drinker does not drink normally. The problem drinker is the chronic alcoholic; he drinks for days, weeks, and even months at a time. The alcoholic says that a passion seizes him periodically to drink. He is a victim of a habit, because the acts leading to intoxication have been repeated so often, he has established a subjective pattern in his subconscious mind.

Because the alcoholic has already yielded to his craving, he fears that he will yield once more; this contributes to his repeated falls due to the suggestions given to his subconscious mind. It is his imagination which causes the alcoholic to return to drinking intermittently. The images which have been impressed on his subconscious mind begin to bear fruit. He imagines a drinking bout in which glasses are filled and drained; then he imagines the following sense of ease and enjoyment, a feeling of relaxation. If he lets his imagination run wild, he will go to the bar or buy a bottle.

The drinker uses effort and will power to overcome the habit, or “cause,” as he calls it. The more effort or will power he uses, the more hopelessly engulfed does he become in the quicksand. Effort is invariably self-defeated, eventuating always in the opposite of what is desired. The reason for this is obvious: The suggestion of powerlessness to overcome the habit dominates his mind; the subconscious mind is always controlled by the dominant idea. The subconscious mind will accept the strongest of two contradictory propositions. The effortless way is the best.

The first drink starts the alcoholic off. This is due to a subconscious tendency or urge established through habit.