You are here: Home / At Home / Classic Weathervanes As Nostalgic American Art 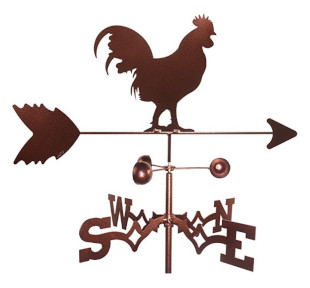 Classic weathervanes have been around since the colonial days in America, and their styles are essentially unchanged. How much of our heritage still remains in such an unspoiled and pure form? Obviously not much. Personally I love weather vanes and though they are a rare sight in 21st century America, they’re always welcome.

Essentially, weather vanes are simple tools that show which way the wind is blowing. Or rather such was the beginning of weather vanes, as now they are much more a piece of folk art than a functional tool.

The first information about weather vanes is from the first century BC, but they became popular somewhere around the Middle Ages. Then they were praised for their usefulness in determining the weather, but around eighteenth century weathervanes started to be seen rather as a piece of art than just a tool.

Weather vanes were used in America from the moment the land was settled. But unlike their European predecessors shapes, American weather vanes were created basing also on commercial motifs, not only religious ones. A dairy farm would have a plump cow vane on its roof, a blacksmith shop would have a pair of pincers etc., thus changing a role of a weather vane to an advert. In the beginning, weather vanes were hand made, but around 1850s they started to be produced in specialized factories, which eventually superseded the smaller producers.

Nowadays there is almost no use of weather vanes save one: decoration. While their usefulness came to an end with the beginning of radio and TV weather forecasts, the weather vanes’ artistic value remains unchanged, especially in America, where they are one of few signs of the genuine American folk art.

Weather vanes that look like whales, Indians in full war dress or grasshoppers became an important part of American history of arts. It’s amazing to think that George & Martha Washington or Thomas Jefferson would have recognized and been comfortable with weathervanes that adorn the roofs of houses – maybe YOUR house?