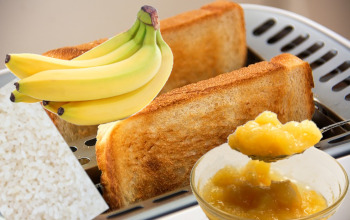 I love the BRAT diet!!! I had been having stomach aches – severe ones – for days. The kind of pain that has you lying on the couch groaning, whether audibly or not. For hours. Day after day. This went on for approximately a week – until last Friday, March 1. I had my usual stomach ache but, in addition, I was freezing – then burning up – freezing – burning up – etc. And it suddenly occurred to me that I must have some kind of stomach virus. And this was the queen of stomach aches because it went on almost all day Friday and lasted until about 5:30 Saturday morning.

Let’s be clear that this diet isn’t about weight loss, the traditional way of using the word ‘diet’. It’s about bland foods that won’t stress and upset your stomach. So when you’re making your BRAT diet list, here’s what to include.

BRAT is an acronym for: Bananas, Rice, Applesauce and Toast. We didn’t have any applesauce but we had the other three items so I had something to eat on Saturday morning. Cautiously, I ate some breakfast: three very bland crackers, chewing them into total mush and eating slowly. Then I waited. An hour … two hours … finally three hours. No pain! No stomach ache or nausea. I was beyond thrilled.

I had barely left the house on Friday but I got dressed and went to the grocery store for more food items that were considered to be OK. And they were.

🌻Bananas
🌻Rice: we usually eat brown but I had a bit of white rice (and bought more) – brown rice has lots of fiber which is usually wonderful, but not when your stomach is inflamed and miserable
🌻Applesauce: I discovered White House chunky natural applesauce and have become a huge fan
🌻Toast or bread: again, I focused on white, rather than my usual whole grain because of the fiber
🌻Saltines are so bland that they’re recommended for an upset stomach and I’ve eaten lots of them in the last week
🌻Potatoes – boiled naturally – no french fries
🌻Oatmeal

☒ Dairy of any kind
☒ Meat or eggs
☒ Sugar
☒ Any kind of oil
☒ No spices
☒ No beverages except water
☒ No whole grains (fiber, again) except oatmeal and what’s in bread

What this means is that your food will be B. O. R. I. N. G. Again, I’m not complaining because boring beats pain any old day. But a potato with nothing isn’t much fun – where’s the butter and/or cheese? Toast without butter isn’t interesting, at least not to me. As for my rice, I cooked it then heated it up by sauteing it in some broth, which worked pretty well. My tummy was happy with the vegetable bouillon.

Criticism of the BRAT Diet

After I had a pain-free day, I read up on the diet and there was criticism because it isn’t ”nutritional enough”. Most authors recommended only staying on it for a day or two. My advice: stay on it until your stomach has healed!!! Worrying about nutrition while your stomach is excruciating is ridiculous. I am so incredibly grateful to the BRAT diet that I can’t say enough nice things about it.

When your tummy is better, slowly and carefully re-introduce foods. I began by adding a small amount of butter to my toast. Then I tried a small bowl of chicken and rice soup. In this cautious way, I re-introduced foods into my diet. The BRAT diet gave my stomach the rest and time it needed to heal and I am profoundly grateful. Thank you, BRAT diet foods!