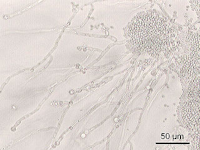 Imagine if two more than two no longer equaled four. Wouldn’t you be baffled? Imagine formerly accepted logic and truth foiled by new information and understanding. That’s the present case with Candida albicans.

Researchers found varying strands of the fungus, some sexually active, reproducing, and creating subtypes of the fungus. Previously, the cells were understood to be only asexual. The finding proves groundbreaking for science, creating new questions regarding future treatment as well as scientific understanding of the fungus.

We previously accepted Candida to be asexual, not mating to reproduce, but that’s not entirely true. Sometimes Candida cells are haploid in variety, meaning they are suited with one kind of chromosome, needing a mate to reproduce.

75% of women will have a yeast infection at least once, creating Candida to form. However, Candida can infect males as well, taking root under folds of skin in both sexes, in the groin, armpit, and breast areas.

Candida Can Be Deadly

In worst case scenarios, Candida can lead to a ‘leaky gut’ or creation of holes in the intestinal walls, allowing the entrance of yeast, bacteria, undigested food, pollen, pollutants, and other debris into the bloodstream. Candida can be deadly, America hosting the highest number of cases, followed by Japan, Mexico, and Germany.

Treatment for the fungus varies, and misdiagnosis is a reality due to external factors; symptoms may be mild, or true causes may be masked by other present symptoms.

While Candida may suddenly arise, underlying conditions, such as diabetes, AIDS, SCID, and thrush may be the actual cause of the breakout. This creates complications of treatment.

The cellular diversity sparks great excitement in the science community regarding preventing and treating infections in the future. University of Minnesota and Tel Aviv University researchers may have revolutionized the way the most common fungus infecting humans is understood and approached.

The finding directs attention to the fungus’ evolution and diversity among other Candida entities as well as other single-celled organisms, most reproducing by dividing. Until now, science believed the single-celled yeast, cause of vaginal yeast infections, systematic blood infections, oral infections and other diseases, was asexual.

However, the dedicated team discovered some representatives of the fungus become haploid or mating. Furthermore, haploid organisms are creating diploid and haploid organisms, all deviating in respective DNA, spawning wide varieties of Candida strains.

Researchers plan to create and host ‘libraries’ of varying strands of Candida, so the fungus can be further deconstructed, so mammals infected with the associated disease can be better treated. Best case breakthroughs give promise to an age where Candida breakouts cease to exist. We can only hope this major finding is only a minor development in learning more about treating and preventing this sometimes deadly fungus.

Leonardo Dawson dealt with digestive issues, headaches and low energy for a very long time before discovering the real reason was Candida. He is now feeling healthier than ever before in his life and wants to share his know-how on fighting Candida overgrowth with others. Visit this link for more Candida treatment information.

Home Of +10 Designs
Inspirational Quote of the Day
Kick this day in its sunshiny ass.