You are here: Home / Health / The Yoga Challenge: Yoga Types

Yoga is a physical, mental and spiritual science that originated on the Indian subcontinent over 4000 years ago. The Sanskrit word ”yoga” means concentration or contemplation and is often translated as ”union”. 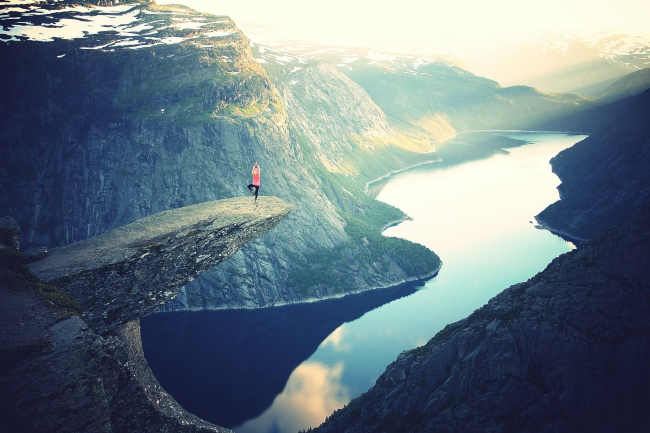 It is through the practice of yoga that you can unite mind, body and spirit. Yoga is not just an exercise system but it is also a philosophy and, if you want it to be, it can become a way of life.

There is no particular religion attached to yoga and people of all faiths practice it. Nor do you have to be a particular body type or at a particular fitness level to practice yoga.

Yoga is open to all, which is partly why it has become so popular in the West, although we have adapted and modified the traditional systems of yoga to a style that is more accessible for westerners.

For example, we’re not used to sitting in a full lotus position with our legs crossed in the traditional position which is supposed to be “relaxed and comfortable”. I know that I can only do the half lotus – if I don’t want pain, that is.

Western practitioners of yoga have generally kept the basic philosophy and physical poses while not delving too deeply into the more abstract, intellectual aspects which are still considered a part of the practice in India.

The ancient teaching of yoga did not separate mind and body and yoga practice has always included breathing as one of its most important aspects. Newcomers to yoga may, at first, be put off by the emphasis on the spiritual but they quickly come to understand that this is taken in a very wide context.

Yoga is about tapping into our spirit and about believing in things we cannot necessarily see but it is grounded in factual, physical teaching.

Yoga Types: It’s Not ALL Physical

When most westerners think of yoga, they think of hata yoga, or physical postures. But in yoga balance is everything and the ultimate aim is to bring about a sense of relaxation and well-being. The yogic view of fitness involves balance and integration, covering all aspects of ourselves and our lives. There are many different styles of yoga with some of the better known being:

* Karma yoga or the yoga of destiny

* Mantra yoga or the yoga of sound

HATHA YOGA is the best-known forms of yoga in the west and, if you have taken a yoga class in the past, it is likely that you took hatha yoga. It was specifically designed as an introductory form of yoga and is therefore especially suitable for beginners.

Through practicing its techniques, beginners gain control over the mind and body and are therefore able to progress to more complex levels. The exercise sequence you will find later on in this book is based upon Sivananda yoga, a particularly gentle form of Hatha yoga.

RAJA YOGA is often referred to as the “king” of yogas because the Sanskrit word ”raja” means “ruler”. This classic school of yoga is the yoga of controlling the mind and of meditation. When you see pictures of the Buddha meditating, he is practicing Raja yoga.

While learning Raja yoga, a student progresses from concentration to contemplation and finally to the ultimate stage which is called Samadhi. This is a state of liberation in which consciousness rises above everyday trials and tribulations.

This essentially means doing the right thing in the circumstances no matter how uncomfortable that might be for us. Karma yoga tells its followers to live for the moment and to value the present.

BHAKTI YOGA is devotional yoga and is particularly appealing to those who are of a religious or spiritual disposition. Bhakti is based upon the concept of adoration, which plays a part in so many major religions. It is a very personal form of yoga through which you can achieve a higher state of consciousness. Many of its practitioners focus upon their particular concept of God when meditating.

MANTRA YOGA is the form practiced by Tibetan monks. The chanting of mantras raises consciousness and is central to Tibetan meditation. Chanting has always been a natural and pleasurable human activity and is one way of expressing emotion as well as gaining focus. (You will learn more about mantras later on in this book.)

All forms of yoga, in spite of their subtle differences, are based upon the fundamental principle of breath. Specifically, the air and the energy contained within breath which, in yoga terms, is referred to as ”prana” or life force. Learning to breathe properly is vital to the successful practice of yoga as, once this is mastered, it means you can also control your thoughts and emotions.

The physical positions in yoga are referred to as ”asanas”. These are designed to stretch and tone your muscles, to increase your flexibility, to stimulate your glands and organs and ultimately to relax your entire body.

The word ”asana” means to be present and this is another fundamental quality you need to bring to your yoga practice. The fluidity and grace gained through practising the asanas will, in turn, lead to a greater sense of ease and self-confidence when dealing with daily life.

Meditation is also considered part of yoga practice and is important for the mental and spiritual benefits it brings. In this book you will learn simple methods of meditation which are perfect for beginners and adepts alike. These meditations will allow you to get in touch with the inner quiet of your spirit, thereby nourishing and protecting it.

In our hectic daily lives, yoga and meditation provide a real chance to de-stress and remove ourselves to a safer, quieter place. This is why yoga continues to grow in popularity despite being such an ancient practice and it is also why many health professionals recommend it to help tackle all sorts of ills ranging from high blood pressure to osteoporosis.

Young or old, flexible or not so flexible, yoga is the perfect way to gain true holistic fitness.