You are here: Home / At Home / Your Ceiling Light Fixture A Burn-Your-House-Down Risk? 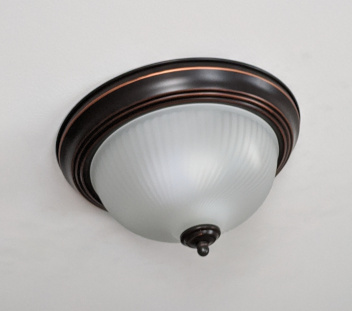 We have a new ceiling light fixture. It replaced an older brass one that my son detested! Poor brass. :-( The picture to the left is the new replacement light.

My son was interested in LED ceiling lights and this is an inexpensive experiment. Even though I like brass just fine, I was happy to go along with what he wanted and it’s true that this light provides a lot more light in our downstairs hall.

Further, since it’s an LED light, it’s cheaper to run and the bulb should last much longer than a traditional light bulb.

However, there IS a problem: the wires from the light are made of aluminum and they connect to copper wires in the ceiling.

” … the aluminum wire expands and contracts with change in temperature, as does copper wire, but aluminum tends to lose its round shape and become oval, whereas copper maintains its original shape and size. So with many cycles of expansion and contraction, the aluminum wire flattens out and can become loose under ordinary screw heads, causing sparking. The second problem is that the skin of the wire can oxidize, reducing its electrical conductivity, particularly at a connection from an aluminum wire to a copper wire”. [https://www.joneakes.com/jons-fixit-database/1183-Aluminum-to-Copper-electrical-connectors]

According to research, the best way to connect these two is to use a tool that costs several hundred dollars which is clearly ridiculous for an inexpensive ceiling light fixture like this one.

A better alternative is to just replace the light with one that has copper wiring.

The aluminum wiring comes from China as they often/almost always use crappy materials. We didn’t know this when we bought the fixture, of course, of we wouldn’t have bought it.

An addendum: we had an electrician in the house yesterday and his opinion is that we’re okay because of the very low level of heat coming into the light fixture, since it’s an LED.

I don’t know yet what we’re going to do. Probably nothing for a while. But this post is to warn you to choose lighting fixtures that attach with copper wire if your home’s wiring is also copper. You can be sure we will not have this problem again because there won’t be any more lights like this.