You are here: Home / At Home / Glorious Waterford Crystal Lamps 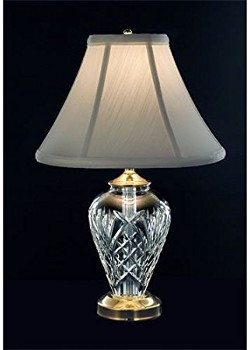 Waterford crystal – in any form – is gorgeous, collectible and expensive. The Waterford lamp is no exception. The story of these lamps starts over 200 years ago, in 1783. In that year two brothers, George and William Penrose, opened their glass manufacturing business in Waterford, Ireland.

Cut glass made in the original Waterford factory quickly became extremely popular around the world, and the Waterford port was always full of ships from Spain, Newfoundland and the West Indies, among others, leaving port filled with cargos of the famous glass, crystal and lamps.

The name of the town quickly became a synonym of high quality glass. Waterford lamps, wine glasses and dishes quickly found their place in many royal palaces and millionaires’ mansions. But nothing can last forever.

Almost a hundred years later, the Waterford Crystal factory unexpectedly declared bankruptcy and their company name vanished, seemingly forever. But their lamps, glasses and all other products haven’t been forgotten.

The Revival of Waterford

In 1947 a small glass factory was opened in Waterford and the glass-manufacturing business returned. The company grew quickly and it was soon clear that it would be as famous as its predecessor. In a few years Waterford lamps along with other products of this company were again being sold around the world. The factory has adapted a lot of old patterns and developed a lot of new ones to compete in the ever-changing home decoration market.

This time Waterford lamps and crystals can be bought not only by the richest but by the middle-class as well. I have many Waterford pieces in my home and enjoy them immensely, especially when entertaining.