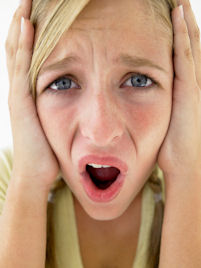 A yeast infection really is a drag! If you've never had one you might not realize how nerve wracking the itching and misery can be. At least, that's been my experience. But here's the thing – the symptoms may vary depending on the individual predispositions of a patient and the form of the yeast infection. Here are the most common signs of the infection.

♦ In case of a vaginal yeast infection – white cheesy discharge that irritates vagina and nearby skin regions; itching and burning during the sexual intercourse, often connected with lower-than-usual sex drive. Another commong sign is occasional pain during urination. Do keep in mind, however, that these signs may not be dominant.

♦ Vaginal bacteriosis, another common women's illness has a very similar set of symptoms as a yeast infection, making it difficult to choose a proper treatment. According to medical sources, only 33% of women who self-diagnosed and treated themselves for a yeast infection actually had one.

♦ In case of thrush (an oral yeast infection) symptoms usually include the following:

* Thick white patches on the palate, tongue or everywhere else inside the mouth
* If the patches are removed, the tissue under it will often bleed and itch
* Redness of the tongue
* Itching and pains during eating, often to the point where it is too painful to eat

The symptoms of an oral yeast infection are often easy to notice and diagnose, but the infection itself is usually very persistent and it takes a lot of time before a full recovery may take place.

♦ Skin candidiasis often starts in warm and moist areas of the skin, usually under diapers. This makes it a common condition for young children. The symptoms of a yeast infection of this kind may include: red flat rashes on the skin, usually surrounded by similar, but much smaller “satellite patches” and itching and extraordinary sensitivity of the skin around infected regions.

It is important to remember that yeast infection symptoms are not limited to those mentioned above. Yeast infections are also known to have also other signs such as acne, lightheadedness, digestive problems, internal organ malfunctions as well as changes in mental functions and behavior. The last two symptoms are often visible when yeast is introduced into the bloodstream.