You are here: Home / Mixed Bag / Is the Telomerase Enzyme the True “Fountain of Youth”? 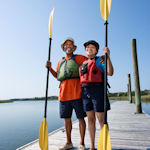 According to legend, Ponce de Leon discovered the fountain of youth over 500 years ago. Since that time, people have searched for magic potions to maintain health and youth. Especially popular with the baby boom generation, this quest has included everything from scams to scientific breakthroughs. Let’s take a look deep inside of our cells to see what scientists are referring to as the “fountain of youth”!

One of the most promising developments involves the small stretches of DNA found on the ends of chromosome strands. Known as telomeres, these little caps keep the ends of DNA from fraying and breaking – both of which are processes that lead to disease and premature aging. Telomerase, the enzyme inside the telomere, contains the genetic template for cellular growth and controls the length of the telomeres. When cells divide, telomeres become shorter; eventually reproduction is no longer possible and cells die. Normally, cells divide approximately 50 to 70 times while other cells that do not require continuous reproduction, such as those in the heart muscle, maintain their length and live for longer periods. Telomeres also remain active in eggs and sperm. Large amounts of telomerase are found in stem cells and those involving the immune system. Although these enzyme levels decrease as people age, scientists have found ways to delay their decline. At California’s Preventive Medicine Research Institute, previously sedentary patients were able to increase their telomerase levels by 29 percent through exercise, stress reduction and healthy eating.

According to Dr. Mehmet Oz, TV host and cardiac surgeon, stress may shorten telomeres by as much as 50 percent, adding from nine to seventeen years to a person’s biological age. Overactive cells also sometimes develop into malignancies. Studies show that tissues from many kinds of cancer, including lung, pancreatic, and bone cancer, exhibit shortened telomeres. Telomerase is overly active in as many as 85 percent of all cancers and may one day be used as a means of diagnosing the disease. Although blocking telomerase could aid in the fight against cancer, the procedure is not risk-free. Possible complications include negative effects on the healing of wounds, the production of blood and lymph cells, and infertility.

Extending Life through Telomere Lengthening – Is It Possible?

Whether doctors can lengthen telomeres to create healthier DNA without contributing to the growth of cancer remains to be seen. One thing, however, remains certain. There is much more to the aging process than genetics. Western medicine is beginning to accept the truths that eastern sages taught thousands of years ago: holistic lifestyles reduce stress, improve general well-being and aid in healthy cell growth. Complementary health practices like prayer, yoga and meditation are gradually taking their place alongside traditional medical care in medical centers around the United States.

Perhaps nothing is more important in halting the aging process than eating a balanced diet filled with a variety of antioxidants and nutrients, getting regular exercise, avoiding the sun’s ultraviolet rays, maintaining healthy weight, and learning to cope with negative emotions. Good genes help but so does good living.