You are here: Home / Self Help / EFT Proof: Subjective Evidence That EFT Is Quite Powerful 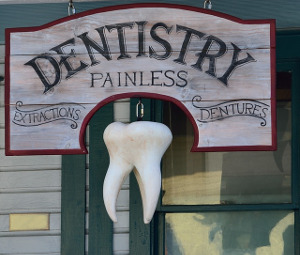 I am a fanatical EFT’er, if you’ll forgive the made up word. If you don’t know what EFT, AKA ‘tapping‘, is, it’s a very popular and very powerful way to change ourselves and our lives. It’s not only powerful, it’s simple and easy to do and who doesn’t love easy? There are directions everywhere and I’m not going into detail on EFT in this post. Instead, I’d like to provide a couple of examples of how EFT works in my life and offer them as subject proof. Back in the 1970s a psychiatrist named Ian Stephenson wrote a book called Twenty Cases Suggestive of Reincarnation. Here is proof that suggests the power of EFT.

Two Instances When EFT Rides To My Rescue

I’ve been having teeth and gum problems lately which have sent me to a dentist’s office multiple times. I’ve had physical problems, not just emotional or mental ones, which makes this more impressive.

Instance #1: I had some work done and there was some pain. I would call it a ‘medium’ on the pain scale. Not agonizing but not ‘ignorable’ either. The dentist gave me a prescription for pain medication but rather than taking it, I just tapped. Every time I did, the pain would disappear! Completely! Just gone. Sometimes I had to tap again a couple of times during the day, sometimes I only tapped once and the pain relief lasted all day. Pretty amazing. No drugs, just simple EFT tapping.

Instance #2: the first time I went to the dentist for work, my blood pressure was 152 over 80-something. Pretty high but no surprise since I was, not surprisingly, very stressed.

However, the second time I went I did some tapping beforehand and it was 123 over 65! The dental assistant was extremely impressed and so was I.

Of course, these two example are subjective, you weren’t there and you don’t have to believe me. But that’s not my goal and I never argue with anyone. My goal is simply to provide reassurance to anyone who might be wondering if tapping has any value for their lives. Yes, it does.