You are here: Home / Health / Natural Remedies / What Are Molluscum Warts?

A neighbor recently became semi-hysterical because of the sudden appearance of a huge crop of molluscum warts. I became curious about the ugly things and here is what I learned.

Molluscum warts are caused by a different HPV virus strain than the one for more common warts. Molluscum warts look like skin-colored bumps, ranging in size from one to six millimeters in diameter. They may appear virtually anywhere on the skin – from upper thighs and abdomen to face and they usually show up in clusters. 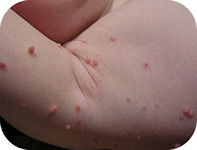 The bad thing about molluscum warts is that they are much more contagious than other warts. Infection is caused by a repeated contact with the part of the skin containing warts. It commonly causes re-infections, making molluscum warts much more resistant for treatments.

Fortunately, molluscum warts aren’t very painful, causing only occasional itching. Even if there are several dozen of them, they are usually only a cosmetic nuisance with no other negative effects.

The Treatment For Molluscum Warts

There is no magic wonder treatment for molluscum warts. In fact, they are often left alone – even with no treatment, molluscum warts usually just go away in about a year after their first appearance. However if they are causing pain or if they are a nuisance because of cosmetic reasons, they may be treated the same way as other warts.

Tea tree oil, a popular essential oil, will at least reduce the growth and spread of lesions. Tea tree oil is a favorite of mine because it almost always stops itching, it doesn’t burn and it has a pleasant smell.

Unfortunately, the treatment is much more difficult than that of other common warts. The problems are caused by the fact that molluscum warts often appear in several places at the same time and they sometimes can re-infect the cleared areas. Unless you are in pain, leaving molluscum warts untreated is often the best alternative.

Home Of +10 Designs
Inspirational Quote of the Day
I know now that goofing off is actually critical to my journey in this life.